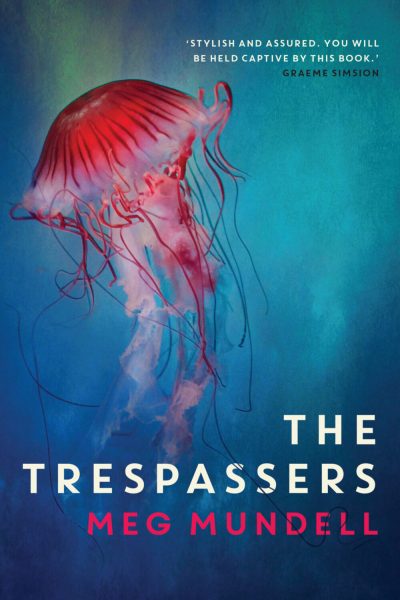 The Trespassers opens with everyone wearing breathing masks while boarding a ship. Everyone is terrified of disease. (UQP published this novel 6 months before the world knew about COVID-19.) Cleary became deaf after surviving this fictional plague but, due to living in poverty, he hasn’t had access to learn sign language. He and his mother are migrating to Australia to become cheap slave labor in the hopes of becoming citizens.

As they sail out of Britain’s harbor, rubbish and putrefaction surrounds the ship. Gradually they reach generally clearer seas but intermittent reminders reflect the current state of our oceans.

The plague made it onto the ship despite everyone passing quarantine health checks.

Mundell does an excellent job of representing disability respectfully. She’s also obviously done her research, understanding how isolating it is to be deaf in a hearing world. Cleary’s experience of increased isolation caused by breathing masks adds depth, as does his REALISTIC hit-and-miss ability to read lips. Having said all this, I am not Deaf. If you’re an #OwnVoices reviewer or critic, please let me know what you think about Mundell’s representation of deafness.

The bulk of the refugees in Trespassers are white and they’re all British. This parallels 19th century and 1950s waves of white settlement. Famously, former Australian prime minister “stop the boats” Tony Abbott arrived in Australia on one of these boats.

Paralleling previous migrations with this future migration adds complexity to The Trespassers while also pointing to Australia’s current treatment of colored refugees. I read The Trespassers months ago and now, as I write this, authorities have tested and identified nearly 200 infected passengers who were released from the Ruby Princess to spread the deadly coronavirus, COVID19, throughout Australia. Officials only usher the wealthy through Australia’s borders during a pandemic without health checks, isolation or quarantine. This adds more condemnation to how Australia treats refugees. Thus, Trespassers provides much fodder for literary dissection and discussion.

I found it difficult to review The Trespassers, mostly because I pondered the story around the time of the bushfires in Australia. There were bushfire refugees. In recent weeks I’ve meant to get back to this review but I’ve been spending too much time investigating what is actually happening (as opposed to what our federal government is telling us) regarding the coronavirus. Suffice to say, The Trespassers is all too prescient, considering UQP published it mid-2019.

Mundell’s characters are engaging and the plot riveting. As a reader I would have preferred the book to end after Part 3 but Part 4 added depth and realism to the refugees’ stories. Rating a book is sometimes easy and sometimes hellishly difficult; The Trespassers was hellishly difficult for this reason. Hence the reason for the initial delay.

(If I rated it as a reader alone and if I’d written this review last year, I would have given The Trespassers either 4 or 4.5 out of 5.)

Read this if you enjoyed Daughter of Bad Times by Rohan Wilson.

Note: this review was updated because the deaf character is Cleary where I previously stated it was Connor. My bad, I should have checked. I’m TERRIBLE with names.