Trepalium is a short TV season from France with English subtitles, set in a 1984-style dystopian France where a wall divides the 20% who are the ‘haves’ and the 80% who are the ‘have nots’. Izia (Léonie Simaga) is a mum in The Zone, the walled-in area for the unemployed. She’s having kid-problems in that Noah (Némo Schiffman), her teenage son, is rebelling, believing she knows nothing. Sound familiar?

Meanwhile the politicians are in on the act. Prime Minister Nadia Passeron (Elkabetz) organises a work program where a limited number of people from The Zone will work for individuals (not companies) as second-class citizens, treated like illegal immigrant domestics in the US.

Ruben Garcia (Pierre Deladonchamps) is a middle manager in the zone. His daughter, Maëlle Garcia (Arauna Bernheim-Dennery), is mute like an increasing number of children. He’s is struggling to keep his family together while his wife, also played by Léonie Simaga, whines and rails that they should have disposed of their daughter and tried again for a more socially acceptable model to help their careers.

Ruben’s wife is having an affair with Boris, previously known as Ethan. Boris is a manipulative bastard who wants her to indulge in a little industrial espionage on the side before they run away together.

Izia starts working for the Garcias on the new program. Her ex, Ethan/Boris, abandoned her and their son, Noah, to work with the resistance when Noah was only a few days old  When Boris realises Izia has money, he steals it from her to manipulate her into industrial espionage because Ms Garcia failed.

Trepalium passes the Bechdel Test because women with agency talk to one another without men present about things other than men: politics, power and toys. However, there is a rape and some aftermath. The sexual assault obviously deeply affects Izia but its ramifications seem relatively brief as the plot moves on.

Drug use is prevalent: the government gives the Zoners — the unemployed — drugs to help them cope with insufficient water but also punishes them for using the drugs. Water must be bought; to drink available water kills people from an awful disease.

The final episode finishes the story arc then goes on. And on. Finally there’s a twist added to justify the extra length, probably intended as a lead-in for a subsequent season.

There are world-building holes like how do you wall IN the 80% so they can’t move around, contenting themselves with dreaming of ‘going south’? At times the plot and characters channel Bertolt Brecht’s stage plays, angular caricatures fulfilling a role but the story is deep with social commentary and contemporary relevance.

Recycled sets become distracting; surely they could nip out of the studio and use a public space for a few scenes? Unless the shallow pool in the wooden deck is supposed to be the same location shown later with a contrasting rectangle covering the pool when Nadia and daughter rip into each other. However, Trepalium generally makes good use of recycled sets when using concrete walls and changing floor coverings and furnishings. The stark locations reflect that the company is god and profits for the company are everything.

Trepalium is interesting and intelligent, a 21st century 1984 and Brave New World combined with a dash of Bertolt Brecht in one low-budget television series. It’s a bit slow-paced but offers astute social comment on everything from the old boys school tie to sex — freely offered and rape — as means of climbing the corporate ladder. Not to mention the wall that stood for 30 years, dividing a country at great cost; this element is prescient. 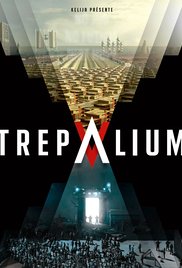