‘Tree Therapist’ Sophie Cunningham started the Authors For Wildlife fundraiser, a spin-off of the Authors for Fireys fundraiser in January 2020. This mammoth undertaking was organised by Emily Gale and Nova Wheetman. They raised $513,149 to support firefighters and to help Australia’s bushfire survivors. including the furry ones.

Who is Sophie Cunningham?

Sophie is a self-appointed ‘tree therapist’ and author of the City of Trees. She wrote Warning: the story of cyclone Tracey, about the aftermath of the cyclone that flattened the city of Darwin in 1975. This seems peculiarly relevant right now: Australia will still be reeling from the impact of this bushfire season when the next, bigger, bushfires start.

Sophie Cunningham is the kind of person who asks the difficult questions like How do we take in the beauty of our planet while processing the losses? What trees can survive in the city? Which animals can survive in the wild? How do any of us—humans, animals, trees—find a forest we can call home?

I am a novice card maker but I made the pictured card. This is a thank you to Sophie Cunningham for appearing as a guest on Dark Matter Zine and for supporting Australia’s wildlife. 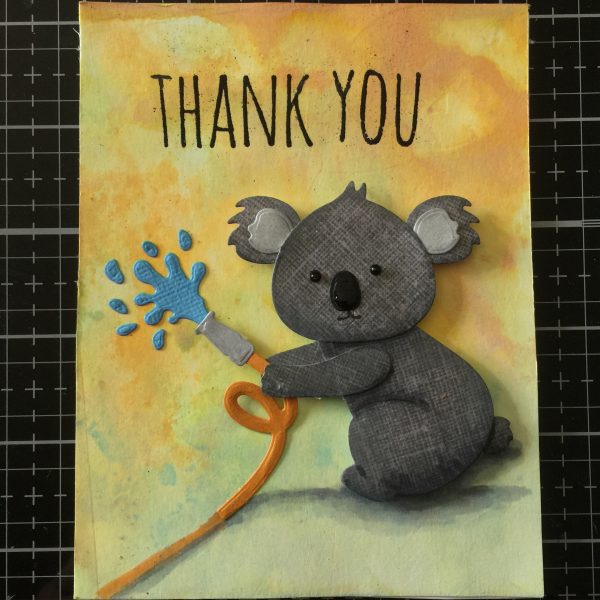 A while ago I made some backgrounds using distress oxide inks, lots of water and, of course, paper. This background is one of those experiments. Ever since it dried, I thought it looked a bit like an abstract bushfire. I recently acquired a koala die so decided that a koala would be fighting the bushfire. It makes no sense but I thought it might be cute.

So, basically, I cut out and pieced together the koala and the hose. I tried using ink around the edges of the die cut koala but that was less than successful. I should probably have used a smaller blending tool. To give the koala some dimension, I used Copic markers.

Foam tape adheres the koala and the hose to the page. So the hose doesn’t end in the middle of the page I glued it down and extended it using Copic markers.

I stamped this ‘Thank You’ sentiment and embossed it using VersaMark clear ink, superfine black embossing powder, with a heat tool. Yes, the heat tool looks like a hairdryer. No, you can’t use a hairdryer. I tried: hairdryers aren’t hot enough. Before stamping I used the anti-static pouch so embossing powder didn’t stick where it wasn’t supposed to.

No, I didn’t get paid nor did I get any kick-backs or rewards-in-kind for this post. I’m sharing my process – my very expensive process that is part of my very expensive hobby – just in case anyone is interested.

After I finished I realized the sentiment is wonky. Another gift of vision impairment. Worse, when I was gluing the flat page to the card, I was SURE I got it straight but, once it was too late, I realized it was wonky. Cue trimming. And near tears. But I did the thing; I refuse to let my disability stop me. Imperfections be damned!