The number 70 tram clatters into Hisense Arena from where I’ve parked on Swan Street and I quickly disembark. There’s still time before the show starts so I sit on a bench and enjoy a scrumptious cheeseburger and thick-cut chips I’d collected from Urban Burger before boarding the tram.

After disposing of the burger packaging thoughtfully, I trekked from the tram stop to the entrance and from there to the door that would lead to my seat. Once crammed into my seat like a sardine (honestly, who designs these venues and do they do so with Olive Oyl in mind?) with my program in hand and Mickey Mouse eared princess crown on my head, the lights dimmed, the crowd grew silent and the magic began.

Performances included choreographed songs from their respective movies by:

Mickey, Minnie, Donald and Goofy appeared intermittently between sets offering comedy relief and introductions. A final ensemble performance of Someday My Prince Will Comeby the featured Disney Princesses and their respective princes, joined by Belle and Adam, Aurora and Phillip, Mulan and Shang, and Cinderella and Charming. 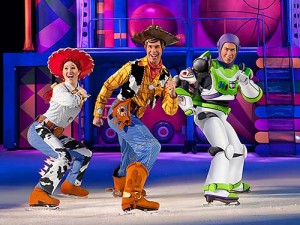 I’m not going to repeat myself. Much.

You’re going to hear this word a lot during this review but Disney on Ice truly was magical.

The performers were exceptional. I have never before been so in awe of what talented people can do with their bodies and performance art. The moves the performers accomplished on the ice kept my eyes transfixed while my mouth was belting out the songs. Speaking of which …

The song choices were fantastic. There weren’t any I didn’t recognise or with which I felt bored. The slower songs were accompanied with beautiful and graceful skating that brought them to life.

Everyone involved in putting together Treasure Trove and bringing it to the masses should be proud of themselves. Treasure Trove was one of the best live performances I have ever seen.

There are a couple of things that disappointed me about the overall experience, but I’m glad to report they had nothing to do with the performance or performers themselves.

The first I have already mentioned is the seating arrangements for Hisense Arena. I understand that they want to cram as many people into as little room as possible, but it’s not comfortable and detracts from the performance when the seats are undersized and have no leg room.

The second is Ticketek’s ridiculous fees. If I’m printing my own ticket and already being charged a “payment processing fee” (a reasonable 2% of ticket price), why am I forced to pay a “service/delivery fee” that equates to 6.2% of the ticket price. I am servicing myself by ordering the tickets online and delivering them myself by printing them at home. It is an exorbitant fee that is unreasonable.

Seating and fees aside, the magic of Disney is alive and well. If Academy award-winning Frozen wasn’t enough to sell you on the enduring magic, catch Treasure Trove and let beloved characters skate their way into your heart forever.