Travelers is yet another made-for-television time travel story. Although far from the first in its genre in the past few years, it’s one of the more intelligent. Travelers have their consciousness transported through time to overwrite the minds of existing people who, effectively, die. Only people who died according to historical records are overwritten.

Marcy Warton’s (MacKenzie Porter) new persona is stymied by incorrect information: a Facebook post said she was a librarian when, in fact, she was a cleaner. Her social worker, David Mailer (Patrick Gilmore) set up the alternative Facebook page to teach her about social media. Not only was Marcy not a librarian but she has pre-existing brain damage that threatens her new consciousness’s existence.

Phillip Pearson (Reilly Dolman) was supposed to have died after his first shot of heroin but, apparently, the historical records were false because his parents were in denial. The net result: the team’s historian is a junkie, biologically addicted to heroin.

Trevor Holden (Jared Abrahamson) was a cage fighter school absentee with attitude problems but he’s been replaced by the oldest consciousness of the team, who’s also something of a historian and engineer. His broken hand is totally the reason (NOT) he drops out of the football team and lets the dream of a scholarship go, much to his abusive father’s aggravation.

And that’s just the back story. The plot is even better.

Some episodes pass the Bechdel Test. For example, the pilot introduces two women alone in the library, talking about work. Another episode features one of the main travelers practically vibrating when she salutes an important traveler (both women). Women are snipers, engineers, doctors and kick-ass hand-to-hand fighters. However, I think not every episode gets it over the Bechdel Test mark.

Carly is, obviously, a person of color. When she ‘arrives’ she kicks her abusive ex-husband’s ass and kicks him out. Her ex, Jeff Conniker (J. Alex Brinson), is a drunkard who beats his wife and won’t take ‘no, we are no longer a couple’ for an answer. When Carly defends herself, he abuses his position in the police force to undermine her. It can be argued that this is racist, however, Phillip — a white guy — is a heroine addict. I’ll leave this for people of color to judge. The dynamics of the abusive relationship and the perpetrator ingratiating himself with everyone around them are intelligent and realistic.

Travelers has that rare combination of character work, human interest and plot. Just when you’ve figured out the series’ patterns and tells, they shake it up and do something different. It’s not perfect — I can’t think of any ‘perfect’ TV series — but it’s an engaging and exciting ride.

My biggest criticism: IT ENDS ON A CLIFFHANGER AND HAS NOT YET BEEN RENEWED.

You have been warned. 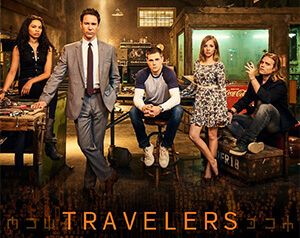