In this podcast Nalini has the privilege of sniggering and chortling with the mute button and/or her hand over her mouth while Tosh Greenslade and Andrew Weldon talk about their political satire The Scomo Diaries: My First Eighteen Months at the Coalface. 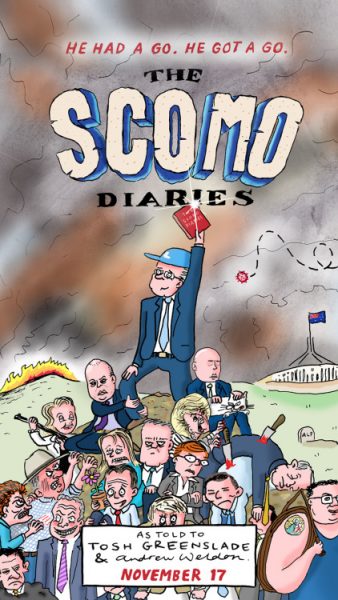 This bio is adapted from Wikipedia because I was rushing in the single hour I had scheduled between interviews.

While he studied at The National Theatre Drama School, Greenslade performed in a show directed by Francis Greenslade. Years later, during the pre-production of Mad as Hell, Francis remembered and recommended Tosh to Micallef. Greenslade auditioned for the show and was cast as a member of the core ensemble. Tosh ANNOUNCED he’s not related to Francis (see Sammy J’s spoof of Scott Morrison’s announcements).

It was Greenslade’s first television appearance. On Mad as Hell he plays a diverse range of characters, such as advertising guru Flornoy Quimbie and ranting idiophobe Caspar Jonquil.

You can find Tosh on Twitter and Mad As Hell (ABCTV; here’s a link to MAH twitter and you can watch it on iView).

Andrew Weldon is a Melbourne-based cartoonist. His cartoons have appeared in publications in Australia and overseas, including The Sydney Morning Herald, The Age, The Australian and The Big Issue. He is the author and illustrator of children’s books, including The Kid With The Amazing Head and Clever Trevor’s Stupendous Inventions.

I hope Rupert reads the Scomo Diaries and throws LOTS of work Andrew’s way to keep him too busy… oh, wait, no I don’t. I want volume two.

Although the Scomo Diaries is more like Adrian Mole grew up and became prime  minister of Australia, Max Barry’s humor is kinda similar in Machine Man.

Together they wrote The ScoMo Diaries

Below is a rough guide to my interview questions, some of which I didn’t ask because Tosh answered them first.

The diaries finish in Feb: regrets? Notes for a 2nd installment?

Considering what has happened in the months since, the Scomo Diaries appears to have used foreshadowing, a literary device, to predict vol 2. So. Plans?

Collaboration for you both: how does it work?

How do your other jobs compare?

Do you write for Mad As Hell?

How has Covid and lockdown impacted your work?

Whose work (in any medium) do you love? 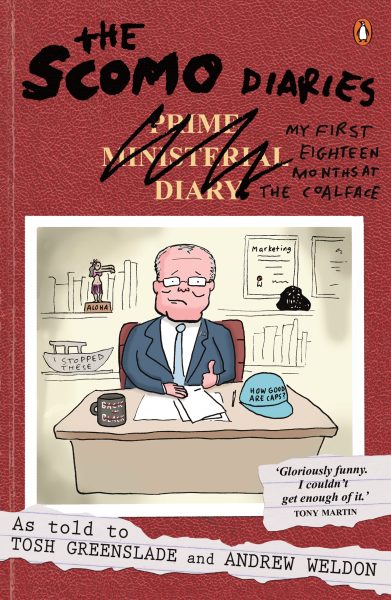