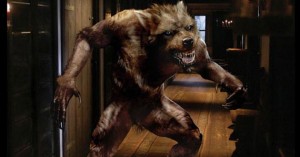 Queen Victoria’s train was sabotaged by a tree on the line. Instead of instructing her burly guards to remove the tree post-haste, Queen Victoria heads to Torchwood Manor for the night.

A cage holding a sickly-looking young man with black eyes terrifies the prisoners in the basement.

Rose discovers a maid hiding in a wardrobe when Rose looks for suitable clothing to cover her ‘nakedness’ (bare legs). The maid tells Rose everyone was taken prisoner – about 2 minutes before Rose and the maid are taken prisoner.

When the full moon rises, the caged man turns into a werewolf. [dun, dun, DUNNNNN]

It’s not clear why the monks put the man in the cage. As a man he seemed harmless enough;  as soon as he transformed, he broke out of the cage. I guess the cage was to build tension and buy the prisoners time to escape.

‘Tooth and Claw’ is a cross between a historical episode and a mild horror story. Rose bets the Doctor she can get Queen Victoria to say ‘We are not amused’; this and other historical references may cause history buffs to squee. Although there are grisly deaths, what is shown on screen clearly has a family audience in mind; no blood, no gore, and a focus on tension rather than the grisly. Highly recommended for family viewing.

Also note the Torchwood references in EVERY EPISODE SO FAR THIS SEASON.