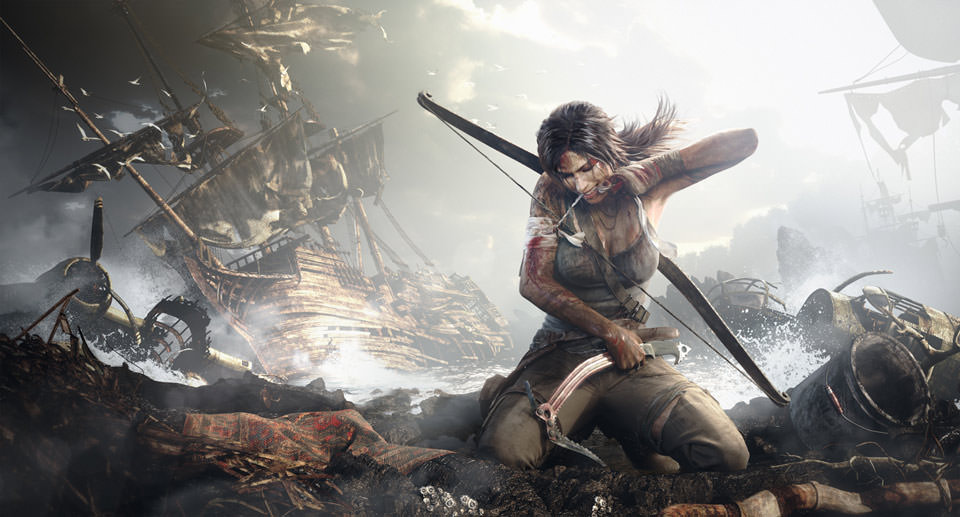 Let me preface this review of Tomb Raider by saying that I don’t often actually finish games. I pick up many games, blast through a chunk of the story in one sitting, play it once or twice more, then leave it half-finished. This is because most games introduce all the key and engaging gameplay and narrative elements in the first act and start to seriously drag from the middle onwards (in contrast to most other forms of media).

At least I finished Tomb Raider. For all the hate I’m about to dump on the game, it was engaging and paced well-enough for me to at least want to see the damn thing through.

The “characters” are hardly even that. They are lifeless, soulless human voids of personality which exist as fodder to presumably give Lara (and in turn, the player) the impression that she isn’t completely invincible. The entire plot is an awfully uncreative, safe rehash of Indiana-Jones-like films and previous Croft games.

The game seems to take itself fairly seriously at first, but when you’re eventually confronted with Lara spewing forth various quips and war cries while destroying an army of zombie samurais, it makes for a rather jarring experience. These zombie samurai are apparently protecting a dead Sun Queen they’re trying to resurrect who still holds enough power to conveniently zap helicopters down by conjuring storms out of thin air. Really? REALLY?

I wouldn’t mind if the game could just bloody well make up it’s mind. The narrative has a serious identity crisis about a quarter in, which continues throughout the remainder of the story. Does it want to be a serious character study, and immerse the character in bleak, isolating environments? Or a stock-standard Indiana-Jones, light-hearted adventure romp? Or a completely ridiculous, over-the-top thrill-ride, requiring the player to suspend disbelief in order to become engaged? The game is some of, or all of these things at times.

Gameplay mechanics are contrived and messy. Lara starts off with a bow, desperately hunting animals in order to survive. Eventually she acquires the most versatile pick-axe of all time which wouldn’t have felt out of place in MacGyver. Weapons and upgrades are drip-fed to the player after completing sections of the island which serve to unlock further areas (oh NOW Lara can rock-climb slightly rougher sections of conveniently placed craggy rock! Or, now you can zip-line across rope bridges you just constructed with your bow!).

Again, the game couldn’t make up it’s mind if it wanted to be a Tomb Raider game, Zelda/Darksiders (which a lot of the adventure style game elements are reminiscent of), or a generic third-person shooter.  And don’t even get me started on the horrible Quick-Time Events. Bleh.

Which leads me to the biggest fuck-up of the game. The actual act of raiding tombs is optional. That’s right, you can play Tomb Raider without ever actually having to raid a tomb. The game is linear the whole way through, the only exception being that you can traverse areas you have been through before and raid “optional” tombs and engage in a dull, boring, meandering collect-a-thon of items which seem added as an afterthought. The puzzles are incredibly simple, both in the Tombs and throughout the bulk of the game.

If the developers decided they wanted to include optional tombs, the very least they could have done is put some effort into constructing challenging, deep and complex puzzles for the player to solve. Instead, we got one-dimensional puzzles with such simple solutions requiring little thought or logical reasoning. Is the average gamer really that stupid? It’s beyond insulting.

While I -obviously- dislike many aspects of the gameplay, narrative and character development, the game is undeniably visually spectacular. The environment is rich and detailed, and the action set-pieces are often absolutely gorgeous.

Likewise, the soundtrack, environment sounds and SFX are rather immersive and well produced. While the voice-acting was lacklustre, I’m not sure whether this is due to poor vocal talent or just the abysmal script. I’ll give the actors the benefit of the doubt.

While I disliked the forced gameplay mechanics which linearised player action and exploration, animations and controls feel remarkably smooth and responsive. Lara is a joy to control and move around the world, and begins to feel like a real extension of the player.

At the end of the day, Crystal Dynamic’s Tomb Raider is fantastic from a technological perspective – the visuals, sfx, animations and controls blend well to create an immersive tactile experience. It’s just a damn shame that the actual game itself was so contrived, forced and ultimately bland and forgettable. Tomb Raider could have been a great game if it had a better script, believable characters, rich dialogue, complex puzzles and a more rewarding conclusion. Unfortunately, the end result is so completely mediocre.