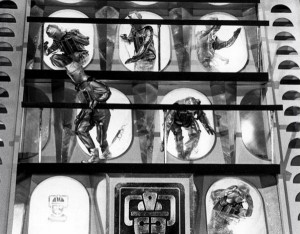 The Doctors Revisited volume I part ii of iv

Foolish humans search for the tomb of the cybermen in the hope of unlocking treasures. Bickering establishes that Kaftan (Shirley Cooklin), the wealthy woman who funded this archaeological expedition, is the power behind this expedition while Professor Parry (Aubrey Richards) vainly tries to maintain control of his expedition. Later Kaftan’s husband, Klieg (George Pastell), is revealed as the silent (quieter?) financial power-broker. Always watch the quiet ones.

The Doctor (Patrick Troughton) leads companions Jamie (Frazier Hines) and Victoria (Deborah Watling) to meet the expedition right after the first death of the story, caused by trying to open the doors. The Doctor is blamed, he argues, he inveigles…

Without the Doctor’s interference – repeatedly opening doors – nothing would have happened; instead he opens doors or tells people how to open them, then says they shouldn’t. I’m not sure if the writers intended this element of comedy but it fits with Patrick Troughton’s take on the Doctor.

Like with many horror stories, the premise for ‘Tomb of the Cybermen’ is a bit thin and hole-y but the story entertains. The horror elements are sufficiently mild to allow young children to watch, be entertained and frightened then reassured that, once again, the Doctor saves the day.

Racism and sexism are rampant in this story in spite of more enlightened writing in earlier stories.

First ‘the women’ are repeatedly grouped together for ‘special treatment’ like staying behind, going together in a group and being protected. It could be argued that this was an excuse for the ‘splitting them up’ trope but patronising comments from some of the men inspire a good slapping.

Toberman (Roy Stewart), the only non-white character in the story, is eye-candy for the discerning viewer with his slender yet muscular frame. At first it appears Toberman is a non-speaking character but eventually he speaks, barely; he’s not quite reduced to grunts. Toberman is the wealthy couple’s servant, treated like a slave.

Toberman is eventually caught by the cybermen who begin his transformation into a cyberman. The Doctor rails at Toberman, yelling at him that the cybermen’s treatment of him is evil, encouraging Toberman to resist the telepathic waves that were so naively drawn on the film as a special effect (adorbs). I wondered if the writers were delving deeper into characters and motivation with the ironic slavery double-standard; I doubt it because not even the Doctor seemed concerned about the way Toberman’s employers treated him.

These extras are part of a larger whole in the Doctors Revisited.