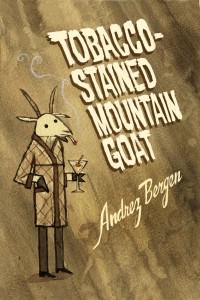 a review by Jane Feely

The first thing I noticed when I began to read Tobacco-Stained Mountain Goat was how unlike it was to anything else I’d read. Ever. The author’s ‘voice’ asserts itself quickly, and in fact most aggressively in the very first chapter; after that it lightens up a bit and the voice plays second fiddle to the story – but what a story.

On the face of things a hardboiled tale that involves guns, girls, intrigue and a fascinating plot-twist, beneath it is a structure of reverence that pays homage to classic cinema and television, with a multitude of references, innuendoes and red herrings that pop up from movies like The Thin Man, The Maltese Falcon, Top Hat and Singin’ in the Rain – sublimely interspersed with science fiction gems Blade Runner, Rollerball and Brazil.

There’s a glossary at the back of the book to fill in the dots in case you’re not such a film buff (like me), but in all honestly I didn’t need it till the very end, so assuredly has Andrez Bergen weaved the tidbits into the tapestry.

This is the story of Floyd Maquina, a man with a horrible job he wishes he didn’t have, forced to do it to pay for his wife’s medical bills. In this occupation he hunts down Deviants: people who differ from the social norm in sickness, anti-social behaviour, or political beliefs. Yes, this is the future, sometime soon, and it sounds all too familiar in the current climate.

It’s also set in Melbourne, Australia – cast here as the last city in the world. This is an interesting premise as Melbourne figured in the same role in Nevil Shute’s On the Beach and will do so again shortly in Kim Westwood’s upcoming novel The Courier’s New Bicycle. In Bergen’s case, being an expatriate who’s lived in Japan for close to a decade, he’s infused the city with the feel of an overflowing metropolis like Tokyo or Osaka, and it feels real.

Contrasting this is a witty, occasionally way-out surrealist touch that undercuts proceedings, tempers the heavier moments, and reminds me of Joseph Heller in Catch-22. Not quite noir, a little bit sci-fi, moments of action, romance, drama, comedy and sentimentality… Bergen criss-crosses styles and genres in the most natural of ways.

It’s no real surprise then that I loved this novel on so many levels and cannot recommend it highly enough.