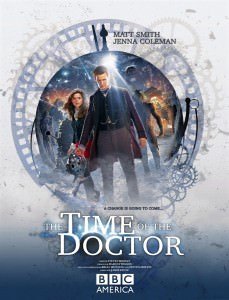 A commentary by Edward and Nalini Haynes

We have a confession to make. We didn’t watch the Doctor Who Christmas Special the Time of the Doctor on Boxing Day as is a geek tradition here in Oz. The reason? We knew Matt Smith was leaving. I was rather annoyed with how the Moff dragged out and hyped up the Ponds’ leaving and how much of an anticlimax that was. So. Tonight. The day after picking up the DW Christmas Special from the post office, the minion and I are sitting down to watch it on TV… [dun dun DUNNNN] [Queue theme music, setting the scene] I’m kinda partial to Saturn’s rings, even if it’s not actually Saturn… Shiny space ships… Mention of Christmas… Matt Smith being theatrical and demanding… Dalek buttons on pillars, minion sniggers, points them out JUST IN TIME so that I started typing JUST BEFORE THE DALEKS STARTED YAKKING. Then… the Doctor teleports into the TARDIS…

Teleporting the Doctor may be entertaining but after 50 years THE MOFF IS CHANGING THE RULES?!?

Someone sic the daleks on to the Moff and put him out of our misery.

The Doctor holding the Dalek eye and the Cyberman head is either brilliant or a total world-building screw-up. Which remains to be seen. The minion is hoping it’s not a screw-up. I’m not holding my breath.

The Cyberman head doesn’t have a Cyberman voice or personality but I admit to liking the humour – hitting the Cyberman with the dalek weapon. That’s gorgeous.

The Doctor said he accidentally invented a BOYFRIEND? GORGEOUS.

Doctor: “I’m being chased by CYBERMEN!!!”

Clara: “Can’t we do both?” (both being chased and having Christmas)

Clara’s been told you can’t wear clothes to church. This joke is getting a bit old.

Mother Superior seems a bit pissed off that the Doctor has a chickie-babe — ‘associate.’

No need for fan fic for this episode, you just need the figures to be wearing what they say or believe they’re wearing to church.

The Doctor and Mother Superior NEED to get a room!

Now the Doctor has given the Mother Superior the key to the TARDIS. The minion doesn’t know if it’s sinister. I’m betting it is: TARDIS-napping.

Teleporting. Again. Because this is Star Trek – ah – Doctor Who…

Clara’s role is to be naked under her clothes (WTF?!)

Now the Doctor is hugging and stroking Clara because she’s cold. No extra clothes for cold weather, apparently. Not even hologram-extra. The Doctor said the hologram had to adjust for temperature, it just took a bit of time, requiring extra physical contact while naked underneath the hologram clothes…

An arm in the snow. My first comment? “It’s a weeping angel.” Moffat is SO PREDICTABLE.

They teleport into the TARDIS again.

Minion says, “To teleport once, SHAME ON MOFFAT. To teleport twice? Shame on us for continuing to watch it.” Minion then looks around the room for missiles. He wants to THROW something at the TV.

The Doctor says he’s a tiny bit bored. SO AM I. Minion agrees.

I won’t repeat the minion’s last comment… it was an instruction to Moffat, or to someone else to do something to Moffat, I’m not sure…

The crack. It’s ba-ack. And my reaction? NOOOOOOOOOOOOOOOOO……… [in Darth Vader/Lucas revamped voice]

Minion wonders if Moffat is so very tired that he’s now ripping of the Scream of the Shalka, a ten-year-old Doctor Who story, because you have the mechanical companion (this time a cyberman instead of the awesome Derek Jacobi/Master). If this is a copy, it’s a poor substitute. “We shall see,” says the minion. He starts up the video once more….

BTW the minion’s language when ranting about the cyberman’s voice would NOT be allowed on the actual Doctor Who TV series.

After the Day of the Doctor, the Doctors hid Gallifrey. Now, instead of the Doctor searching for Gallifrey, the timelords are reaching through the universe, asking the timeless question: “Doctor… Whoooo?” so they will know they can come back through the crack.

Stephen, sweetie, I know you’ve invented the shame of the Emperor’s New Clothes for all the poor sods who are allegedly ‘too dumb’ to see through your plot holes, but seriously? This is WOEFUL.

The protectorate threatens to destroy the planet after declaring she’s here to protect the world. Why? Um… No motivation given for the 180 degree turn-around. Because, of course, NO-ONE FORSAW POTENTIAL WAR as the result of protecting this planet.

Moffat does fanfic of his own work. Again.

A wood grain cyberman, he’s A TREE. Minion says, “That’s what you’d get if the Moff worked on the Hobbit: a CyberEnt, the Desolation of Doctor Who.”

The cybermen TOOK DECADES to break through the protective barrier? Yeah, right. And without destroying the planet.

The crack demands the Doctor’s name. The Church prevents the Doctor from talking and yet he stays and fights and they forget the crack.

The minion says, “I’d like to put Moffat under a truth field so I can understand why he wants to write this S___.”

Three hundred years after the Doctor tells the cyberman to remind him of a task at a random point in time, the cyberman does so then dies. At sunrise. How pretty, sad and sweet.

“WITH HANDLES,” says the Minion.

The Doctor has not only told Clara about his regeneration – a first – but he’s even told her he’s number 11. Then he adds the Valyard AND claims that number 10 regenerated and kept the same face so THE DOCTOR IS DOOOOOMED.

The Silence doesn’t have a mouth any more.

Dalek guns poke out of the foreheads of lots of people.

Moffat destroyed Doctor Who as a parting ‘gift’

I – I – I – after growing up with Doctor Who ALL MY LIFE, I’m not sure if I like Doctor Who anymore. *cries*

Minion: “It’s people like Moffat who really need to work on projects like the Hobbit. Because he couldn’t make it any worse. The Hobbit would be a better use of Moffat’s time and energy than destroying my childhood icon.”

“Oh, I died… it’s funny the things that slip your mind.” And the Doctor kisses the nun.

Clara travelled back to earth for a cameo with the family only to be fetched back to Christmas by the Mother Superior so Clara can be with the Doctor as he dies.

New title for the Moff: GRINCH.

Minion points out that the Daleks have turned on impure Daleks in more than one story AND YET the Moff ignores the canon to have Dalek eyestalks poking out of human corpses’ heads as if the Daleks have never cared about purity. The minion says “As a member of the audience, I DO NOT LIKE BEING TREATED LIKE AN IDIOT.”

The Doctor is talking about dying of boredom before the Daleks shoot him. I’d agree if I wasn’t so aggravated by the poor story-telling.

The nature of the crack – sucking things in – it’s CHANGED. Clara leans against the crack, whispering in to it, with IMPUNITY. Bet Rory wishes he had that super-power.

THE WALL FARTED. SERIOUSLY. Then the crack disappeared.

Suddenly the Daleks know that Gallifrey can return. Pity they didn’t tell the Doctor that a couple of seasons ago.

The Time lords send the Doctor regeneration power so he can move to number 13. The Doctor suddenly turned into a superhero, destroying the daleks and winning the day.

Someone rescue Doctor Who from Stephen Moffat. PLEASE.

Minion says, “In THIS EPISODE (let’s forget the previous series arc, Moffat has a REALLY SHORT ATTENTION SPAN so we’ll just discuss THIS STORY), in this episode the Timelords are using the crack to communicate with the Doctor. Then, FINALLY, the wall farted and the crack disappeared. THEN the crack reappears in the sky with superpowers for no apparent reason, breaking the world-building within this story where they were originally just used the crack as a communications device, a bridge from one dimension to another. You’ve got to ask Moffat ‘How much crack can one person take? Is Heisenberg your personal supplier?’”

Now the doctor sheds his clothes and leaves fish fingers and custard when he regenerates.

Clara knows he’s the 11th doctor but SHE DOES NOT KNOW ABOUT AMY POND?!? Moffat may have described Karen Gillan as ‘wee and dumpy’ but for the first time ever, a departed companion reappears for a regeneration.

The FIRST EVER regeneration, from William Hartnell to Patrick Troughton, included on-screen SFX. Other regenerations have been variously on screen and off-screen, like the Patrick Troughton to Jon Pertwee regen that occurs before the credits finish so we just see Jon Pertwee collapsing through the TARDIS doors. In this day and age of uber, over-the-top SFX, we just BLINK-AND-YOU-MISS-IT, Matt Smith is suddenly a horrified-looking middle-aged man.

Credits roll while we rant.

To recap the regen: the Doctor sheds his clothes BEFORE the regen, appears as his old self WEARING HIS OLD CLOTHES talking to Clara, then BLINK, he’s the new Doctor, with new clothes.

So. When is Moffat being replaced with someone who can actually write?

Minion says, “There should be a compulsory regen of the showrunner every time there’s a regen of the Doctor. It’s like he’s flailing wildly in order to put his own creativity into the stories. What do you do when you don’t have the creativity to carry the story? You do a Stephen Moffat. A showrunner should not be allowed to push the reset button, replacing the doctor, unless they also hand over the reins. That was not a Christmas Special, that was a Christmas ORDEAL.”

Me: Yeah, that’s why we didn’t watch it at Christmas time.

Minion says, “I quite enjoyed the Day of the Doctor but this story completely disconnects with the previous story. HOW CAN SOMEONE BE SO DISCONNECTED FROM HIS OWN WRITING?!?”