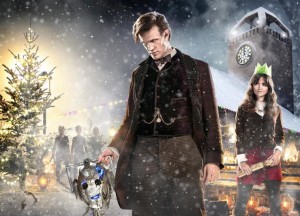 The minion and I wrote a commentary of the ‘Time of the Doctor’ a while ago with lots of spoilers.

The short non-spoilery version is that the ‘Time of the Doctor’ is fan-fic of Doctor Who like Peter Jackson’s The Hobbit is fan-fic of his own work, Lord of the Rings. Iconic classic enemies of the Doctor feature alongside new Moffat enemies: daleks, Cybermen, Sontarans, Weeping Angels and the Silence, just to name a few. The Doctor defends Christmas, a village on Trenzalore, where the crack in the universe appears bearing not gifts but a truth field.

Deus ex machina (god in the machine) and forgetful writers combine to ensure various plot twists have no logical basis, the Doctor is placed upon the planet by the person who then tries to prevent him from taking action, Clara forgets she knows the Doctor’s name but she works around it and all the while the Weeping Angels, Daleks and Cybermen attack in waves, only to be defeated, century after century until, finally…

In the extras Moffat describes Doctor Who as ‘nonsense’ while lots of actors and guest commentators describe Doctor Who as a comedy. I think the writers’ main goals these days are to frighten children and make adults laugh; in this, Doctor Who is a success.

‘Behind the lens’ (run time: 13 minutes) is a substitute for Doctor Who Confidential; this time done well. Significant focus was placed on Matt Smith leaving, including mentioning his new job: camera man. How do you go from being one of the world’s most recognisable TV icons to being a camera man? 0.O

[Note: apparently that was a joke; Matt Smith is in Terminator:Genysis as an actor]

Matt says that he wishes they had an extra year working together as they’d just found their feet.

There’s a deleted scene where Clara hugs the naked Doctor who looks clothed.

‘A night with the stars: the science of Doctor Who with Brian Cox’
Brian Cox is a physicist whose commentary on the Wonders of Life has been making science sexy. Brian Cox and Matt Smith banter before launching the TARDIS to attend the lecture.

My review copy is part of the Doctor Who 50th Anniversary Collection to be released on 10 September 2014. Thanks, Roadshow.