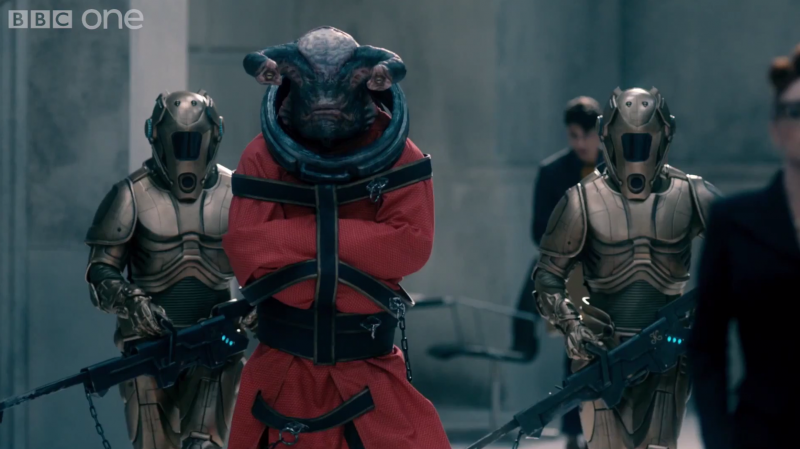 Snarky spoilers, Sweetie. Seriously, end-of-zode spoilers. It’s why I put the rating at the top.

Clara (Jenna Coleman) is greeted by the increasingly clueless Doctor (Peter Capaldi) who puts Clara down while trying to entice her away from her hot date. The TARDIS phone rings. Clara tells the Doctor not to answer it but he does anyway.

An unfamiliar disembodied voice TELLS them they’re here to rob a bank and, in spite of only one of the foursome identifying as a thief, they’re all in. They don’t know what their rewards will be although Psi and Saibra’s problems are a clue. The Doctor and Clara have no reason to trust a strange voice telling them to do something illegal and highly dangerous with no clue as to their incentive.

To escape the guards inside the bank who are already knocking on the door of their hidden room, the foursome walk out of the building — and enter the plaza in front of the bank, walk across the plaza, through the front door into the foyer. Whut?!

Once in the foyer, security shuts down the building to scan everyone there for guilty intent. One guy is found guilty via a telepathic scan. Guilty of what? We never find out, we just know he felt guilty about something. The Teller telepathically turned the guilty party’s brain to soup, denting his skull in the process. Because brains to soup = damaged bone. [faceroll] The guy lived, though — even though his brain dribbled out his eyes.

Can you imagine the wealthy in our era setting foot in this bank? The wealthy are often allegedly guilty of raping the planet; exploiting the vulnerable or, at least, their employees; not paying their taxes; and on and on it goes. Beware! Enter this bank at your own risk, be put to death by the Teller and have your assets seized. Yep, that’s going to work.

Anyhoo, our intrepid bank robbers have a few puzzles to solve to work out how their disembodied puppet master expects them to break in to the vault, because, of course, a recorded message supplying them with information as they need it (click for your next instruction) or a transmitter sending signals would have been too obvious.

Fairly soon they’re in the first level of tunnels. They step through a handy-dandy grid that’s not even an air vent to break out of the tunnel into the Teller’s prison. Saibra bites the dust first. Or injects herself with the mysterious death-penalty needle. Whatevs. Queue melodrama because we’re supposed to care about this person who’s been on the screen maybe 10 or 15 minutes so far, about whom we know nothing except that the poor dear is an involuntary shapeshifter. The remaining three escape.

Instead of all the tunnels looking identical so we’re misdirected as to whom the Teller is pursuing, the identical tunnels have random lighting variations. I guess the Moff hasn’t seen many successful split-the-group-up-during-the-chase scenes. This would have worked better with more redshirts as well. Perhaps this international success bringing home the BBC’s bacon is on a limited budget?

Psi is so-called not because he’s psychic but because he’s an IT guy who’s fitted his brain out as a mother board. (I don’t get it either.) He no longer uses his brain for memory so it was simple for him to wipe all his memories of friends and family while being tortured. I guess his captors/torturers didn’t mind Psi fiddling with his memories during torture. Psi’s memory wipe enabled him to make the ultimate sacrifice — his life — for Clara, not because he cares about her but because he doesn’t have anyone to love. Awwww.

A surprise solar flare reaches the bank, neither anticipated nor defended against in spite of all the futuristic technology available in this bank. The bank’s defences go down, enabling the Doctor and Clara in to the vault.

They start looking for specific safety deposit boxes in the vault.

The Teller finds them. Possibly because they forgot to close the vault door behind them. Moffat forgot to include hunt-and-seek scenes in the vault while the Doctor and Clara look for their safety deposit boxes. Because that might have increased tension. And it might have constructively used up more of the time slot.

Capture. Relocation. Escape. When Ms Delphox (Keeley Hawes), head of security, captured the Doctor and Clara, if she behaves according to her custom, she would have instructed the Teller to melt their brains on sight, worrying about relocation later. So it is pretty obvious what is coming next.

Return to the vault is very quick. Security apparently didn’t relock the vault or take any, like, SECURITY measures. WTF?

Before the bank is melted, there’s a long, drawn-out scene where the Doctor confronts the bank’s owner (Keeley Hawes) and tells her to call him. Apparently she does, on her death bed. I’m still puzzled as to why Moffat thought a death-bed confession or plea for action would be justification and HowTF that filled in the various holes up until this point, like why rob the bank if a guilty conscience can get in? Why rob the bank at all when the Teller can see your motivation? Why get in to plant the rewards and not handle the whole thing then? Why, why, why.

In spite of the melodrama, the worst part of this zode has got to be the “Shut up, shut up, shut up, shut up…” sequence where the Doctor goes on and on, filling in time while attempting to be dramatic. Even Capaldi’s acting skills are put to the test when the writing and plot doesn’t give him ANYTHING to work with.

The bank and all its contents are destroyed. By a solar flare. This was supposed to be the highest-security bank with all the toys where the über-wealthy stashed their loot.

But it’s ok, because after the solar flare envelopes the planet destroying the bank, the Doctor and his companions teleport out. Through the solar flare. And have huggy farewells as the Doctor drops them off elsewhere BECAUSE THERE WASN’T ENOUGH PLOT TO FILL THE TIME SLOT.

The ‘Time Heist’ plot is maybe a half-hour zode stretched to 45 minutes. What could have been a Hugo-award-winning episode or double-episode was, in the end, very disappointing. And filled with holes. I could have ranted some more, citing every individual hole, but I just don’t have the heart.