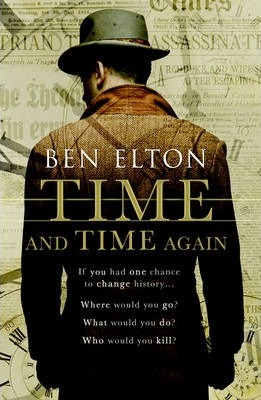 Hugh Stanton travels back in time to 1914 to change the twentieth century so it doesn’t end up in the disaster that it became. When Isaac Newton had his ‘nervous breakdown’, he discovered relativity centuries before Einstein and predicted a cross-over point allowing someone from 2022 to travel to 1914. Hugh jumps in an attempt to save us all.

Time and Time Again riffs off H G Wells’s Time Machine while written in the dry, male-oriented style (although with better prose) than much of the spec fic I grew up with, so this novel made me nostalgic. Feelings of nostalgia can ramp up a novel’s rating, at least on the first read. (How many times have I re-read a novel to scream because SUCK FAIRY?)

Elton appears to be trying too hard to be a feminist ally while failing quite abysmally. His wife? Fridged. His female professor who sends him back in time? A selfish overbearing bitch who becomes more overweight and unpleasant as the author falls further and further out of love with this character. His love interest in 1914? That relationship is all about how enlightened Hugh is, with a sex scene that focuses on Hugh’s experience of Brazilian wax jobs and other unnamed topiary styles while being a feminist ally who enjoys the natural state of a 1914 bush.

The story loses the plot (quite literally) when the ‘Time Again’ bit kicks in, another woman follows Hugh through time and she’s also all about Hugh, how enlightened he is and helping Hugh be the hero.

Hugh isn’t very bright so he doesn’t notice the bloody obvious in the beginning nor does he decide to do the bloody obvious to stop the cycle. Like THAT Tom Cruise movie, the one where TC dies again and again (yipee!) this novel needs to be cut before the end to maintain its integrity and to make sense.

Malcolm Forbes reviews Time and Time Again, stating that it “is a melange — in places a mishmash — of tones, styles, content and even dimensions” but Forbes doesn’t notice the gendered issues therein. In my opinion, this novel is a must-read for time travel aficionados like me (I’m more than an aficionado, I’m a time travel tragic), but the plot holes will drive the meticulous in circles, and the sexism will inspire a rant from every good feminist.