Wen is the Tiger Daughter of two Chinese immigrants, one of whom was a surgeon in China. His frustrations at not qualifying in Australia ended with him working at a restaurant. And taking his frustrations out on his family. He is extremely controlling and unreasonable. And, at times, violent.

Wen’s best friend is Henry, a refugee still learning English. She tries to help him in a supplementary English class despite the teacher disciplining her for interpreting.

Wen and Henry plan to sit an exam to enter a scholarship program. Being scholarship students at private schools is a common theme in Australian Young Adult fiction as a way of introducing the “poor” character. However, these two students live in actual poverty with only their dreams driving them to escape.

Lim represents first and second generation immigrants and women with care, respect and detail. Her depiction of poverty is realistic; I only recall one other recent OzYA book that did this so well, and that’s Frankie by Shivaun Plozza.

Lim’s depiction of domestic violence was realistic given that this violence occurs on a sliding scale. Considering the “heavy” subject matter, Lim’s representation of DV was “light”. By “light”, I mean she didn’t gloss over it, it felt real to me as a reader, but violent scenes were few and far between with relatively mild violence. My comments are in no way intended to diminish the awfulness of living with even this level of domestic violence. This is merely to set expectations so readers don’t feel they’re about to plunge into a depressing terrifying bloodbath. Tiger Daughter is much more … palatable? … and suitable for its target market of 11 to 14 year olds.

However, my one criticism of this brilliant depiction of so many social issues relates to domestic violence. The story contains a neat story arc with a “fix” at the end. No way in hell do I believe that “fix” was so easy.

It’s important to note that Wendy Orr’s Peeling the Onion received criticism for being “too angry” and not including a “fix” with the character healed and assimilated at the end. I feel Lim’s novel is a domestic violence version of Peeling the Onion but she’s made it lighter, more palatable, and included an unadulterated happy ending. So whether that’s a criticism or a strength is really up to the reader.

Tiger Daughter is an excellent young adult novel set in contemporary Australia, centering a first generation Australian born to Chinese migrants. Racism, domestic violence, social isolation and community are all strong themes. Tiger Daughter isn’t a light read although its depiction of domestic violence engages without dwelling or exposing the horrors many experience. The story arc includes an unrealistic happy ending that will satisfy many readers.

Note: I’m not one of them. I’m like “PACK A GO BAG. GET THE FUCK OUT. HONEYMOON PERIODS DON’T LAST. GET HELP.” But that’s me, a former counsellor who worked with domestic violence and childhood sexual abuse survivors. And this story is aimed at 11 to 14 year olds apparently, so, with that audience in mind, it’s good that the violence is toned down. 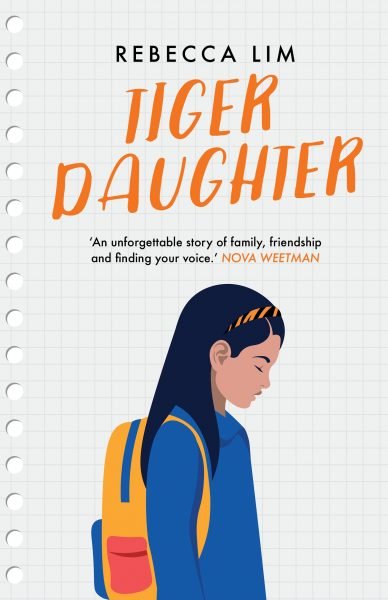