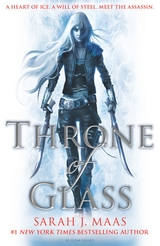 a review by Elizabeth Manthos

Throne of Glass follows the story of Celaena Sardothian, an eighteen-year-old serving a life sentence in the filthy salt mines of Endovier. As a highly trained assassin, she never would have expected to be working as a slave in the salt mines, but she made one mistake, one fatal mistake. She got caught.

After a year in the salt mines, the young Captain Westfall and Crown Prince, offer her a deal she cannot refuse: her freedom in return for one huge sacrifice. She must represent the Crown Prince in a to-the-death competition, to find the Kings new Champion. Her various competitors consist of some of the most dangerous men in the country, each sponsored by a member of the Kings Council. If she succeeds, she’ll win her freedom, if she does not, she will be returned to Endovier to finish her sentence. If she survives that long…

One contestant ends up dead, his body disfigured, followed by another, and another. Can the assassin find out who the killer is before she becomes the next victim?

This novel is hands down one of the best novels I have read in a long time. With so many new authors popping up and the same stories being reused and recycled, it was refreshing to read something completely new, with a strong female lead. The Cinderella inspired novel was well thought out and well written, with easy to read prose and flowing dialogue.

The character development is outstanding and I can assume will only progress with the sequel. Characters seem like real people with witty comments and real personalities. Celaena is an outstanding heroine and it’s amazing to finally read a novel where the heroine is not a simpering idiot. Celaena is strong, smart and almost fearless, she doesn’t need a man to rescue her.

I can highly recommend this novel to anyone who is interested in young adult fantasy novels. I’ve recommended this novel to a few friends already and I’m making them read it. It’s an outstanding novel and I CANNOT wait for the sequel! (I’ve ordered the Novellas to!)