Finn is a rebel without a cause, a seemingly bipolar teenager. When she sees Prince Thorne, the son of ‘The Slaughterman’ from Pirenti, she rushes towards him. Her eyes glow golden when they look upon each other, which, for Kayans, usually means they’ve bonded as partners for life. However, this isn’t the case for Finn and Thorne. Their mutual attraction for each other, mixed with their dislike of one another, causes conflict when they set out on an adventure together.

Jonah, Finn’s twin brother, keeps her relatively stable at great personal cost and yet they are best friends along with their foster-brother Penn. Penn evidently has obsessive-compulsive disorder, needing to count things to stabilize himself in stressful situations.

Jonah is training to become a warder, one of a class of magic user in the country of Kaya, who have banned Finn from practicing her magic because her ‘soul is too big for her body’.

Finn loathes warders for barring her from their society and banning her use of magic. Hobbled, prevented from fulfilling her potential, she races towards danger.

The warders all have white hair and eyes. Lutius (the head of the warder order) has ‘creepy white hair… worn in about a thousand braids, which [Finn had] always thought looked hideous’ (p 8) although he has ‘leathery’ skin. From the description, I assume it’s brown leather and not white leather. When they’re killed, the warders’ hair and eyes turn to their original color (p 350).

Isadora, an expert sword wielder, has white hair, white skin and white eyes. She’s the typical extreme ‘albino-type’ (as opposed to the less extreme whiter-than-everyone-else albino-type) commonly seen in SFF. Isadora does not have poor eyesight nor does she have any apparent difficulty with sunlight burning or blinding her.

It’s interesting that McConaghy focuses on the warders and Isadora’s looks, and yet Thorne is described as pale to imply danger when he’s introduced ‘He wore his hair shaved very short like all Pirenti soldiers did, and his skin was pale and ghostly like a Kayan’s would never be’ and yet Thorne’s paleness is relative and glossed over later. He’s just a different shade implying a different race while Isadora is reviled. Isadora is introduced as a potential killer then Finn says Isadora has ‘Hair and skin so white it was purest snow; eyes of the bloodiest red I’d ever seen’ (p69).

To be fair to McConaghy, Isadora is the leading lady, one half of the romantic pair in the third and final book in The Chronicles of Kaya, but her descriptions of Isadora and use of white to signify malevolence is as harmful to people with albinism as Trump’s rhetoric about Muslims and Jews is to those people groups. The difference is that people with albinism are a smaller minority with less of a voice, less power, more misconceptions in the mainstream and we are even marginalized by straight white nondisabled authors who ally themselves with other minority groups.

Although I’ve studied bipolar disorder (which is what Finn seems to have) and obsessive-compulsive disorder (which is what Penn seems to have) I have no decided opinion on these representations. People with mental illness get to have an adventure, yay? Also, Finn and Penn are normalised, in contrast with warder white and Isadora. On the other hand, Finn seems co-dependent, her teenage brother is sacrificing his life and health to keep her alive, and people manipulate Penn to keep him stable. I’m interested in hearing how people with these disabilities feel about their representations.

There are some sexytimes, however, Thorne is less HBO and more MA-rated due to a few scenes. I get the impression McConaghy goes there then shies away from the detail… perhaps she grew up with the door being closed on sexual encounters on TV? 😀

There’s a sequence where Thorne wakes up in the dead of night to find Finn in his bedroom; they go into the living area of the house to find the housekeeper lighting candles; then they go for a walk, joining others watching the sunset. Blindfolded eyes visibly glow. And the ending… the resolution is a bit over the top on the one hand and a bit ‘because NEXT BOOK’ on the other.

Thorne is an enjoyable romantic adventure although its representations of minorities — especially friends’ ongoing descriptions of Isadora — are offensive, and some sequences need a little repair. However, I believe most readers will enjoy it regardless. Thorne is suitable for Young Adult and mild New Adult fans of romantic fantasy. 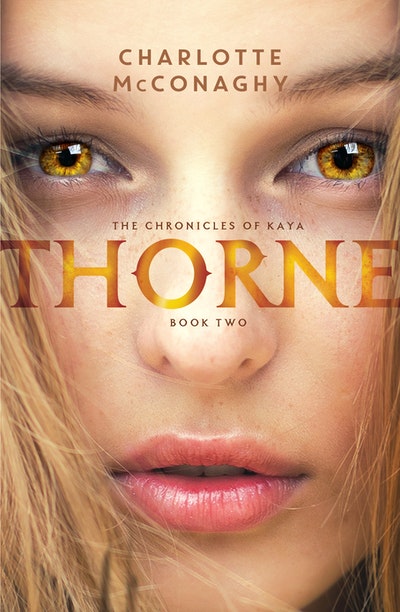