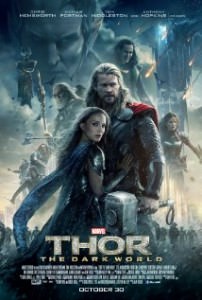 Thor: The Dark World credits rolled before the final couple of scenes concluded an evening’s viewing at IMAX. My reaction? ‘AGAIN! AGAIN!’ (in Baby Sinclair voice)

With the current resurgence in Norse mythology, you are probably familiar with the story of Thor, wielder of Mjölnir (a hammer) and son of the All-Father Odin. If you aren’t familiar with thor’s mythology, comics and movies, you’ve probably been off-planet or in hiding. If so, I recommend watching Thor 1 before The Dark World (Thor 2): it’s enjoyable although not as good as the second movie. The first movie also sets up several storylines for the second movie.

Thor (Chris Hemsworth) is in Asgard, pining for his love Jane Foster (Natalie Portman), while Sif (Jaimie Alexander) pines for Thor. Ugh. At least this is only mentioned in passing; Sif remains a kick-ass warrior. Loki (the awesome Tom Hiddleston) sulks, imprisoned for his betrayal of Asgard, while his mother Frigga (Rene Russo) visits.

Frigga is pretty damn awesome too, kudos to Rene Russo.

Jane disappears from Earth; Heimdall (Idris Elba) tells Thor who rushes to Earth to search for her.

Jane finds the Aether, a weapon capable of destroying the universe.

Thor: The Dark World not only passes the Bechdel test, a simple gender-bias test, but the characters all have strengths and weaknesses based on who they are instead of falling into gender-stereotypes.

The creators of Thor: The Dark World have pinpointed what makes a successful comic book movie: characters with some depth and development (but not too emo or self-absorbed), an action-based plot with romance, explosions, special effects AND HUMOUR. I laughed out loud during Thor more than I usually laugh at comedies. One of the delightful aspects of attending the first public screening of Thor instead of a media screening is that the audience laughs too, including at the geek humour.

I saw the IMAX 3D version. The 3D feature was carefully moderated, enhancing not overshadowing the action and characters. Unlike at other cinemas, IMAX 3D glasses fit comfortably over my own glasses. Unlike at other cinemas, IMAX have ushers in their theatres who quietly step in to ensure everyone’s enjoyment of the movie. I love the IMAX big screen but, even more than the big screen, I appreciate the care paid to ensure all patrons are able enjoy IMAX movies. I swore off going to the cinema after watching the Hunger Games elsewhere; not only has IMAX wooed me back, I think I’m spoilt for all other cinemas.

(In the interests of full disclosure: this is NOT a sponsored post but IMAX gave Dark Matter a double pass to see Thor for review purposes. I have restrained myself from ranting about several bad experiences at other cinemas in Melbourne.)