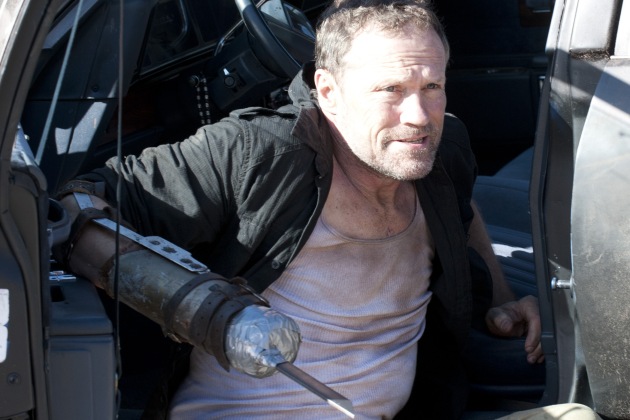 ‘This Sorrowful Life’ begins with Rick (Lincoln) revealing to Daryl (Reedus) and Hershel (Wilson) a plan that the others can’t know about until afterwards. To give Michonne (Gurira) to the Governor (Morrissey). Rick asks Merle (Hooker) for his help with the plan.

All four men struggle with the decision. Rick changes his mind upon seeing a hallucination of his dead wife. Rick tells Hershel they can’t do it, but Merle has already taken Michonne into the catacombs, knocked her unconscious and tied her up. He starts walking her to Woodbury.

Daryl and Rick discover that Merle has taken Michonne. Daryl goes after them.

Glenn (Yeun) asks for Hershel’s blessing to marry Maggie (Cohan). It is given. Glenn proposes to Maggie. She says yes.

After hot-wiring a car, Merle admits to Michonne he has killed 16 men. She manages to extract from him that he had never killed a living person before Woodbury. She points out that they still have a chance to go back. Merle says he can’t but frees Michonne and tells her to go back to the prison.

Merle sits in a car with music blaring, surrounded by zombies, drinking whiskey. He drives slowly enough for the zombies to keep up and goes to the proposed meeting place between the Governor and Rick. The Governor’s henchmen run to find the source of the noise and Merle snipes them one by one. The Governor pins Merle down, bites two of his fingers off, chokes him, then shoots him.

Rick gathers the group. Tells them what happened when he met with TG. Admits what he was going to do, but that he changed his mind. He tells the group that contrary to his speech at the end of season two, he is not their Governor. They are a democracy and they need to vote as to whether the group stays to fight or leaves. He leaves the room and goes to a watchtower where he sees Michonne.

Daryl finds zombie Merle eating one of the Governor’s men. Though clearly distraught, Daryl stabs Merle repeatedly in the head.

I always liked the character of Merle even when he was a hard-as-nails redneck hooligan that Rick handcuffed to a roof in season one. From the first moment you see the character, you knew he had a depth that is rare in zombie media. Michael Rooker brought him to life with outstanding realism. I’m sad to see him go.

Overall, a great episode that gave the group a side of Rick that hasn’t been around for a while. Merle was right: Rick has grown cold, but he is not yet heartless.

‘You gotta play the hand you’re dealt. I only got one.’