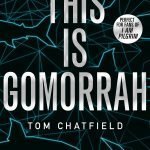 This is Gomorrah opens by convincing me it’s not Gomorrah, it’s hell. ISIS recruited Western brothers, one of whom sees the other shot by enemies while trying to take Syria. The survivor takes lots of photos of his brother’s corpse in the hopes of winning the social media war. That was just the prologue.

Via Azi, aka AZ, we get a crash course in the dark web and how noobs flag themselves for surveillance while pros embed themselves with the opposition. Like a British hacker embedding himself in a neo-Nazi group. Just for trolling purposes, you understand. He’s not obsessive. Well, if pushed he’ll admit to being obsessive. Meanwhile, his employer is getting annoyed that Azi is neglecting his work.

Anna arrives on Azi’s doorstep bringing violence and threats of more violence. Azi is ensnared by this security agency (perhaps), and is coerced into doing their bidding. Thus the thriller picks up speed.

Early on I decided that this was either an intelligent book with insights into hacker culture or a deeply flawed book that I would hurl into a wall. On page 159 the plot ‘twist’ reveals… This Is Gomorrah is intelligent. And thrilling. Now the question is, what exactly is going on? And will Azi and Kabir survive?

Eleni, a doctor, spots a person wearing what looks like the attachment for a cochlear implant. Being a doctor she says that it is unlikely to be real, and she thinks the man is wearing an earpiece. Eleni says

Anyone can be deaf, of course. But I do not think he is… The worst deaf person is one who does not wish to hear! That’s you, by the way: this is how we talk about a stubborn fool’ (p. 166).

Thus she exposes cultural ableism without critique alongside a critique of Azi’s character. Ableism is (partially) where disability is used as a metaphor for personal failings.

Azi asks if they can test to learn if the man really is deaf, ‘…like throwing a ball at a blind person to test them’ (p.166).

Eleni replies, ‘The implants allow them to hear. This is the entire point of the implants… And what kind of idiot throws a ball at blind people? You have been watching too many movies’ (p. 167).

Throwing a ball at a blind person is another ableist trope, as is the ‘person faking a disability’ trope and the assumption that every blind or vision impaired person either has no sight at all or is faking their disability. Gomorrah does not delve into ableism — it’s not relevant to the plot — but this exchange seems to partially reinforce ableist tropes and partially challenge them.

Chatfield’s riff on VR (pp.229-230) is highly accurate and derogatory. It includes Azi musing that in VR ‘You’re at the mercy of flesh in a way that ordinary life rarely achieves’. Ironically VR tends to be less disability accessible than real life because you’re required to be able to see well (the visual gave me a blinding headache within a couple of minutes) and you’re usually required to raise and lower your height, something that may not be possible for a lot of disabled people. Then there’s the manipulation of objects and engaging with the VR environment etcetera. VR is meatspace without disability access. However, Azi doesn’t comment about disability access. Instead he focuses on his own personal discomfort. In his real world he escapes through computers but in VR, ironically, he can’t. ‘It’s the opposite of everything Azi has ever hoped to achieve online.’

‘No wonder, he thinks, so many tech firms are so excited about this most coercive of tools. Why bother changing the world if you can build a virtual one, pixel by pixel, that’s pre-adjusted to corporate settings? Why let people gather in public spaces when you can build a proprietary communal experience?’ (P. 230).

Gomorrah vs the real world

Azi thinks ‘…everyone knows that informal conversations between emotionally stunted ideologues are the backbone of innovation’ (p. 230). Chatfield is on a roll here. These informal conversations are not just the source of innovation, they can shape and destroy your world. Once upon a time, there was an international IT company called EDS. They’re the guys who made the high production value 20-minute ‘herding cats’ mockumentary in the very late 1990s, and another about assembling a plane in-flight and another… You get the idea. Corporate rumour had it that there was a certain conversation between friends at a golfing game in the early naughties. You’ve never heard of EDS, right? That golfing game took EDS from ‘have stocks as bonuses’ to ‘you’ve lost your bonuses’ to being consumed by HP. As I type, I am anticipating the next twist in Gomorrah, which I believe will be a play off this premise.

Just like in my first viewing of Sixth Sense, I’m riveted not because I missed the twist but because I’m looking for clues to see if I’m right.

Gomorrah is like Gattaca in that the twist was obvious: the guy in the wheelchair was obviously going to commit suicide right from the time his character was introduced and I was internally screaming all the way through the cinema screening. (If you haven’t seen Gattaca yet, shame on you!)

I was wrong about Gomorrah’s ending.

My experience of Western education is that it venerates Greek and Roman culture. This veneration is ironic given that the White Australia Policy (revoked in 1975) did not allow Greeks with darker complexions to immigrate to Australia. This is classic colonialist misappropriation of culture.

It appears that Azi has had a similar colonialist upbringing in that he lectures Eleni on the intricacies of Greek architecture. She replies, ‘I admit, that is an interesting fact. Which is why all of us learn it in primary school. But thank you for explaining my culture to me’ (p.167). Fist pump for the burn!

Eleni has one more scathing observation about ancient Greek culture that is so venerated by Western Conservatives. Her observation is that it was ‘basically fascist but had some good ideas’ (p.167). At school I learnt that Ancient Greece was the first democracy but now I wonder if it was really the first ‘acceptably misogynistic white attempt at democracy’.

After teachers informed us that Ancient Greece was a democracy, students asked questions… and pointed out historical facts. Like that Ancient Greece did not allow women, slaves or lesser people to vote. So it was not really a democracy at all. I guess Ancient Greece is the Western Conservative idyll and those classroom dynamics were probably most teachers’ nightmares. Gomorrah’s cultural comment is witty and pertinent. I would have loved a book like this to share with my friends at high school.

Azi visits a server farm, described in very sketchy detail. Server farms are, as Gomorrah says, often kept in secure bunkers. I know of server farms in Melbourne that are supposed to be as large as football ovals or larger, but they’re underground. Gomorrah says ‘…the heat is palpable…’ If you’ve ever hosted a LAN (Local Area Network) gathering with multiple computers — I’ve had teenage boys without about 6 computers in my house — you don’t need heaters in winter unless you’re living somewhere EXTREMELY cold. However, the novel does not mention humidity or indoor rain. This is a thing. It can rain in indoor server farms (https://www.theregister.co.uk/2013/06/08/facebook_cloud_versus_cloud/). One of Gomorrah’s strengths is its exposure of IT culture and environs, something geeks will discuss. I’m sure geeks will also dissect Gomorrah for flaws, just as Azi and Ad, as teenagers, dissected their beloved War Games movie. Gomorrah’s climax is as flawed but does it matter?

There is one point at which Gomorrah utterly fails at regarding server farms. This has multiple plot ramifications but I won’t discuss specifics because it’s part of the over-the-top splodey climax. Let’s just say that in the climax, plot overrides reality.

This is Gomorrah starts with a basement dweller but this is Britain so Azi dwells in a shitty shed in his own backyard despite having the entire house to himself. A security agency implausibly hijacks his life to go on a thrilling adventure with astute observations of hacker culture and other things. From the outset, it’s plain that Gomorrah either has some huge holes or there will be a twist. There are a few twists. Early on, Gomorrah references the movie War Games; Gomorrah’s climax is as believable, more splodey and as feel good as War Games. A hook at the end makes me wonder if a sequel is planned or if Chatfield is simply ending with social comment and a knife to the reader’s guts. Highly recommended.