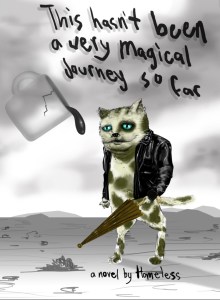 Hank Williams (self-named) is in a hospital. He’s dead when Sid, an orange cat wearing a black leather jacket, half helps and half kidnaps him. Hank Williams and Sid ride off in a beaten up old van called Nancy. Hank Williams — never just Hank, never just Williams — has fallen down the rabbit hole in a not very magical journey.

This not very magical journey involves driving along a grey road in the middle of a grey desert with a black abyss slowly, methodically, pursuing them.

Hank Williams has flashbacks to his time in a psychiatric ward with Patsy Cline (also self-named). Patsy Cline is the love of his life and his umbrella protecting him from the rain of centipedes that is his life. Hank Williams’s flashbacks entwined with the current not very magical journey shed light on literary allusions and metaphors. Without this Rosetta Stone, this novel would be more of an acid trip with pop culture references tossed lightly with social issues.

Literature AND a cult novel in one

If in doubt as to the Literary merit of this not very magical journey, ponder the gopher digging a hole. Once ‘he’ tells our intrepid travellers that ‘he’ is, in fact, a ‘she’, her ignoring them while focusing on her magnum opus causes the male travellers to cease existing. I imagine Clementine Ford celebrating this linguistic observation.

Not long afterwards, Sid threatens murder-by-ceasing-eye-contact. Homeless has, apparently, spent time living homeless on the streets. Thus Homeless knows the pain of invisibility, the pain of people walking past without making eye contact. (Being vision impaired I’m not really in the loop on this but I’ve read about eye contact and the pain of death-by-avoidance in this manner. It’s common for people to talk about me to others, like UniCanberra staff talking to the staff member who assaulted me in the refectory but not talking to me or looking at the CCTV footage of the assault; invisibility undermines one’s sense of self and kills slowly.)

I read once that someone wasn’t all that impressed by Einstein and his achievements. Instead this person was more impressed or aggrieved by all those like Einstein who, lacking Einstein’s privileges, ended up in workhouses or Nazi gas chambers. Homeless the author strikes me as the living embodiment of this quote: if not for contemporary technology bestowing the ability to write and self-publish with minuscule opportunities, this work of Literary genius would not have made it to my iPad.

This Hasn’t Been A Very Magical Journey So Far reads like an acid trip. It’s an R-rated hybrid of Alice In Wonderland and Monty Python. However, the literary allusions and metaphors cement Magical Journey’s place on both Literary and Fantasy shelves. I confess I didn’t enjoy the novel although it’s intellectually engaging, compelling and deep. Nor do I want to participate in a book club discussion of Magical Journey although there are multitudes of symbols to unpack. Magical Journey is a novel for the intellectual enquirer, Literature aficionado, experimental novel enthusiast, social engineer, and astral-travelling doper but not for the delicate or faint of heart.

This Hasn’t Been A Very Magical Journey So Far will be a cult classic along the lines of He Died With A Felafel In His Hand.