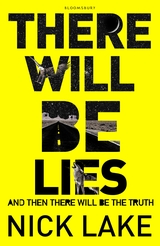 Shelby Cooper and her mom live in Phoenix, Arizona. Her mom has home schooled Shelby. Shelby has no friends. No social life. Her only communication with people other than her mother is online, done in secret so her mom doesn’t find out.

When Shelby is hit by a car, she’s taken to hospital. Then Shelby’s life starts unraveling like a knitted sweater.

I knew nothing about There will be lies until I started reading it; when I see ‘Nick Lake’ as author, he’s automatically on my must-read list after Hostage Three and In Darkness, two very different novels (one contemporary fiction featuring a female YA protagonist kidnapped by Somali pirates, the other featuring a male YA protagonist time-shifting between modern Haiti and historical Haiti). There will be lies is a return to the fantasy or mythological genre, utilizing Jungian archetypes to the best effect.

In the opening pages, Shelby’s style of narration left me wondering if she is deaf. When she’s in hospital I dismissed the idea. My first instinct was correct. Lake is one of the rare male authors whose depiction of teenage girls is excellent. I felt his exploration of Shelby’s world as a deaf girl was good too, although I’m not deaf so I’m not the best judge. However, Lake’s exploration of what it means to have a sensory impairment, the sense of separation from mainstream society and the importance of touch, of connection, is excellent.

When Shelby enters Native American Dreaming, she can hear. This troubled me at first because of the ‘disability-gets-healed’ trope so common. In this instance, Lake gets a pass: Shelby broke her leg as the precipitating (beginning) event that launches her on her journey. That’s also healed in the Dreaming. Animals like Elk and Coyote talk to Shelby in the dreaming; they’d find it tricky to sign to her.

Shelby experiences loss when she returns to reality, losing her hearing once more. This sense of loss and grief may have been underplayed, but Shelby had a lot of other stuff happening in her life right then to distract her.

On Monday I was talking to the Geek Girls at Geek Girl Day. I mentioned my criticism of Neil Gaiman’s Hansel and Gretel story released last year: it was too much the same as the traditional stories. The feature of Gaiman’s novel is really the artwork that doesn’t work for me. The Geek Girls’ response was “It’s Hansel and Gretel, it’s a bit hard to rework that story.” I disagreed.

THIS, CJ AND REBECCA, THIS. Featuring a YA female protagonist who is NOT a whiny bitch. Read it. You can thank me later.

For the rest of you, my conclusion for There will be lies: Nick Lake is on my personal must-read list. He should be on yours too. There will be lies has a 17-year-old protagonist who has been kept as a shut-in, she’s deaf and incredibly intelligent with an authentic voice as narrator. Shelby’s journey is interesting, engaging and liberating.