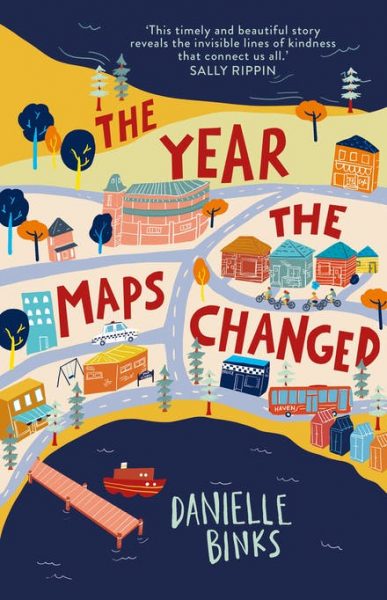 The Year the Maps Changed follows 11-year-old Winifred (Fred) and her life in Sorrento when 400 Kosovar-Albanian refugees arrive. We follow Fred through the year of 1999. Unlike most other middle grade novels this coming of age story is not just about Fred growing up. Instead it is about her dealing with change in the world around her as well as within herself.

‘I was eleven when everything started and twelve by the end. But that’s another way maps lie, because it felt like the distance traveled was a whole lot further than that.’

Fred was six when her mother died. She has since been raised by her Pop and adoptive father Luca. But now Pop is at a rehabilitation center and Luca’s girlfriend, Anika, has moved into Fred’s home along with her son, Sam. Annika and Luca are also expecting a baby. Her family is changing and so is her home town. The reader is witness to the growing pains Fred experiences as she has to deal with these immense changes. Her constant fear that she will be left off the map.

I read The Year the Maps Changed almost in one sitting. It was just brilliant. I don’t usually expect to get blown away by novels aimed at middle graders but this book truly caught me hook, line, and sinker. It reminded me of the books I would lose myself in as a kid. The ones my mum would struggle to get me to put down at the dinner table. I have raved to my bookworms about how good this book is and cannot wait for them to experience it for themselves.

Fred is a highly likable protagonist. She displays intelligence and compassion far beyond that of a regular youngster. Although she has her faults, ultimately she learns from her mistakes with the help of some guiding and compassionate adults. She has some truly profound moments and insights. One particular moment that really stayed with me was when Fred was questioning how Luca could still love her dead mother when he was having a baby with Annika. This was Pop’s very beautiful insight:

“Fred you should know that it’s very easy to be both happy and sad at the same time, and it’s possible to love two people at once, and miss someone so much even while you move on without them.”

Mr Khouri is another fabulous character who provides insightful teachings to Fred:

It’s okay to follow your curiosity, even if you don’t know exactly where it will lead – and that the point of life was not to have all the answers, but to never stop asking questions.

Sometimes maps are used to take power away from people, along with their land and language. And sometimes they help to change history – or erase it.

It is character and snippets like these which all add up to make this such a profound and memorable reading experience. Don’t get me wrong, it isn’t a heavy read by any means, there’s plenty of lighthearted moments of mischief and laughter. But it also raises serious some issues such as the impact of grief, the difficulty of becoming a blended family and the treatment of asylum seekers.

The Year The Maps Changed provides middle grade readers with the human side of seeking asylum. Pregnant Nora and children Merjeme and Arta are the fictional faces of those who have been forced to leave their homeland, travel to a strange new country only to be locked up like criminals. Their only crime: seeking safety.  The compassion that Fred and her family show for the refugees in this story is something we can all learn from and what an great way to teach kids about detention centers. I really hope this book finds its way into the hands of as many kids and adults as possible.

The Year The Maps Changed really is a beautiful read. I salute you Danielle Binks. Thanks for the fabulous reading experience.