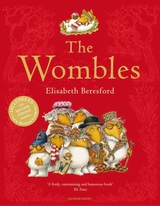 The Wombles is a classic novel originally released in 1968, converted into a TV series in the 1970s with Bernard Cribbins as narrator. Wombles became symbols of the Tidy Britain campaign.

The story opens with Great Uncle Bulgaria supervising a young womble choosing his name — Bungo — before Bungo ventures into Tobermory’s workshop to fetch a collecting bag on his first day at work collecting rubbish on the Common. Bungo also meets Night Watch Womble Tomsk then lazy Orinoco, with whom Bungo later has many adventures.

Later in the novel we meet Madame Cholet, the cook, and Alderney, the young female Womble who runs the tea trolley. Although gender roles are stereotypical, I applaud Alderney instigating an adventure, leading Bungo into trouble. The Wombles was ahead of its time in terms of being anti-litter and pro-recycling so a bit of gender-conformity – for its era – is forgivable. I have a vague memory the TV series may have introduced more female Wombles in later episodes.

Tomsk is athletic but appears to have a learning disability. Although he’s dismissed by other Wombles to their detriment, Tomsk is never judged by the author. Over the course of this novel, Tomsk becomes more of a feature while earning respect from his peers and elders.

I thoroughly enjoyed revisiting these stories, gems from my childhood. A CD with Bernard Cribbins reading some of the stories is an absolute bonus to which I’m currently listening. Bernard’s narration is adorable! According to my media player, the CD includes over 4 hours of stories, so I’m far from finished.

The Wombles has endured for at least two generations, going on for three (more if you count parent and grandparents). I predict this classic children’s novel will be read and re-read by fans of all ages for many years to come. Highly recommended.