A review of a middle school fantasy novel

Twelve-year-old Gauge lives with his grandfather behind a carpentry shopfront. Years ago Gauge told people he saw an invisible wolf so the townspeople believe he’s a Voyant. Because of this wolf’s curse the mayor sentenced Gauge to death. Grandpapa bribed the guard who came to take Gauge away. So now Gauge lives in secret, only emerging at night. However, everything changes the night Grandpapa dies.

Gauge believes that the dead must be “released” from their bodies or forever sink into the Bog (of eternal stench?). So he risks himself to fetch the Steward who performs these rites. A bird appears; the Steward accuses Gauge of calling the Wolf. She flees. He flees. There’s a lot of fleeing.

Vitalis’s portrayal of religion, the costs, and the extraordinary twist at the end invites readers to interrogate religious beliefs in their lives. Even more exemplary is Vitalis’s narrative, which is entirely age-appropriate and accessible despite delving into such complex issues.

Also I’d like to draw parallels between the wolf and a certain Discworld character. But that might be considered spoilery. And no, I don’t mean Angua.

Death as an industry

Partly via religion, partly via a money-making enterprise by the most wealthy men in the town, death has become an industry. It used to be that coffins were contributed “free” (paid for in taxes and community contribution). Now, however, the “Vessel Maker” makes vessels of various degrees of complexity and beauty to fit every pocket.

However, when Roux’s father dies, the Vessel Maker does not consult her about her ability to pay. He just sends one of his most elaborate, most expensive, coffins. And she, as a child, questions nothing – until she receives the bill.

The Healer and the Steward provide various other services to the deceased at varying costs as well. Gradually the children start questioning customs, which is excellent. In my opinion, no one should mortgage their future to pay for a wedding or a funeral. However, there are those who feel they must put on such a display.

The Wolf’s Curse has a few characters who are disabled. There is a tendency for those characters to either be heading towards death or to be evil. Often disabled characters use canes as mobility aids. The various representations of disability cut across dominant ableist tropes in my opinion. Good guys who need a bit of help to do what they used to do with ease contrast with the bad guy so disability is not symbolic of character traits. The villain does not die so eugenics is not at play. Illness and death are facts of life, and Vitalis portrays them well in this book for middle grade students.

Vitalis has taken the title “The Wolf’s Curse” and turned the concept on its head while engaging with larger societal issues in an entirely age-appropriate way. Gauge is a bit of a Harry Potter type in that he’s a social reject and a Voyant (he can see the wolf). He has skills above and beyond those you’d expect in a twelve year old today but that is explained by being his grandpapa’s apprentice. An expose of religion and the death industry alongside good representation of disability all wrapped up in a fast-paced age-appropriate middle grade novel is quite a feat. I am in awe so I highly recommend The Wolf’s Curse for middle grade readers.

Discussion of this novel in class or with carers may enrich the reading experience. 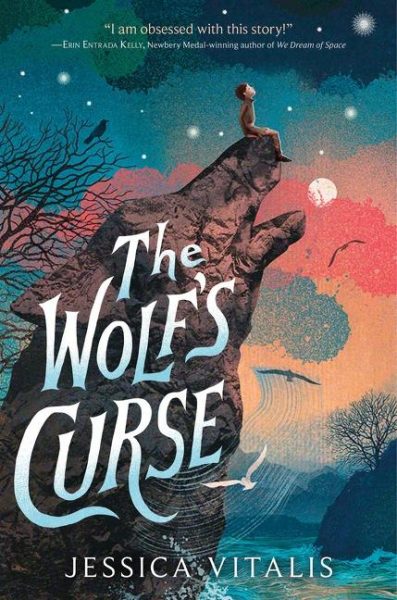