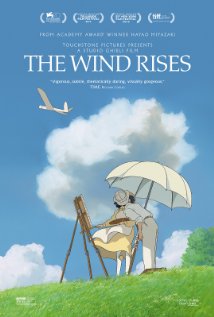 The Wind Rises is a partial biography of the life of Jiro Horikoshi, who made great leaps in aeronautic engineering for Japan during World War II. The story encompasses his love for aircraft, some of his struggles and his love for the woman who became his wife.

Romantic developments are sweet although, at times, a little slow-paced. An obscure man hiding from Germany in Japan brings trouble Jiro’s way; this sort of foreshadows what follows but only if the regime is extremely paranoid. More explanations, more depth, would be appreciated.

Imperial Japanese persecution, Jiro having to run and hide, is alluded to although this fascinating dichotomy — the engineer building planes for his country being persecuted by that same country — is more of a tease than an exploration. Jiro moves into his boss’s home to hide from authorities; the risks and rewards are glossed over.

Throughout the story a fantasy or dream-sequence gives some more depth to Jiro’s character and his motivations and yet his struggle — the engineer who wants to build but not to build weapons — is barely mentioned in passing.

Overall, I felt The Wind Rises had interesting attributes but it missed the mark. It’s too slow with insufficient plot and too insubstantial, lacking in the fascinating politics affecting Jiro that could engage an interested audience.