It’s New Years day and I discovered a TV series I liked – Siren – is on Stan. Hubby promptly subscribed for a month, only to discover The Watch, a Terry Pratchett story, is a tv series on Stan. Our viewing plans promptly changed. We watched episode 1.

Over the years hubby and I have read and re-read Terry Pratchett’s Discworld novels many times. We are more than passingly familiar with the series. Not to mention the previous TV series made by the likes of Sky in Britain (Going Postal, and Hogswatch are two such series), featuring guest appearances by Terry Pratchett. Well, that’s no longer possible, but we LOVED the idea of another TV series.

However, without Pratchett to oversee the new TV series and the sale of the rights, tragedy struck.

The Watch is, apparently, the “first” Watch novel – Guards, Guards! Mixed up with Nightwatch – and televised. Except it isn’t. It’s a bloody disaster.

The Watch opens with Death and Vimes having a chat on an ethereal plane. Death has duck-egg-blue glowing eyes BUT NO SKULL. His eyes just glow from within a cowl. Like Detritus, his voice acting leaves a lot to be desired. Pratchett describes Death’s voice as being like tombstones slamming, always always always depicted in full caps.

Death in The Watch sounds closer to what I’d think Nobby would sound like than Death – but not the same.

Nobby and Colon don’t seem to exist either. Instead, Vimes keeps putting his cigar behind his ear, Nobby’s trademark move but with cigarette ends. I wonder if Vimes is intentionally a compilation of all three characters.

Although Carrot only arrives from the mountains in the first few minutes and Vimes is still a grubby drunken sot, Detritus, Cheery, a dirty Angua and the like are already part of the Watch.

Cheery is played by Jo Eaton-Kent as a nonbinary normal height person. In the books, Cheery is a bearded woman dwarf. While I’m all for minority representation, I’m disappointed that they’ve changed Cheery so radically. Discovering Cheery’s differences – her non-dwarfishness in a dwarfish body, epitomized by her increasing femininity – was a beautiful, powerful journey. Instead, we’re presented with Cheery as a “finished product”, already employed at the Watch, and not at all dwarfish. Nothing to see here.

We soon meet Lady Sybil Ramkin (Lara Rossi), who kidnapped Vimes to teach him, under threat of being fed to a dragon, that crime is not a legitimate profession. Although I like the idea of casting a woman of color, Rossi is hardly the portly dowager-like spinster Pratchett describes. In fact, The Watch casting is ageist sexist casting typical of America: instead of casting love interests of similar age, Sybil appears young enough to be Vimes’s daughter.

Any hope I had for Sybil died when she pulled a dragon out of her coat, held it on her hand like a frog or gecko, THEN USED IT AS A FLAME THROWER. That one scene shredded and burned – at Fahrenheit 451 – just about every piece of Pratchett’s dragon lore.

It’s worth mentioning here that Simon Allen wrote for season 3 – the least worthy season – of The Musketeers, which saw the end of the series. He worked on MI High, which gets 6.1 on IMDB, a low score. Anything below 7 on IMDB is “view at your own risk” although some series are, admittedly, underrated.

Allen also wrote 5 episodes of New Tricks, which rate fairly well on IMDB. I haven’t watched the series myself. Without knowing Allen’s brief for New Tricks, and the effect of someone else as showrunner alongside staff writers, it’s impossible to judge Allen’s talent. However, his bungling of an otherwise almost-guaranteed smash hit does not bode well.

Prior to 2011, Allen’s CV on IMDB is just shorts and the like, so he’s come from nowhere, been handed a plum job that could have cemented his career, but was too intent on putting his own spin. So he trashed this opportunity.

This is why we can’t have nice things.

Bet it’s a long time until we get another Discworld series because the Powers That Be won’t see this as his incompetence, they’ll interpret this as “there’s not an audience”. Mate, I don’t want to see or smell you taking a dump.

According to this article, Rhianna Pratchett joins Discworld fans unhappy with this series. “The Watch will disappoint Discworld fans—and maybe everybody else, too” says Alison Flood. It appears Michael Walsh of the Nerdist is the only reviewer who says The Watch is “exciting and hilarious”, which doesn’t speak well of his taste and/or objectivity. 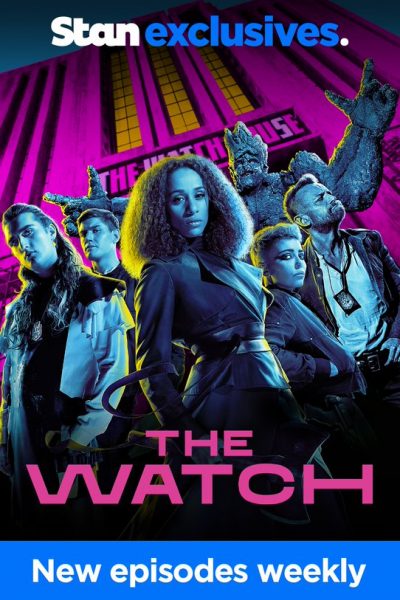