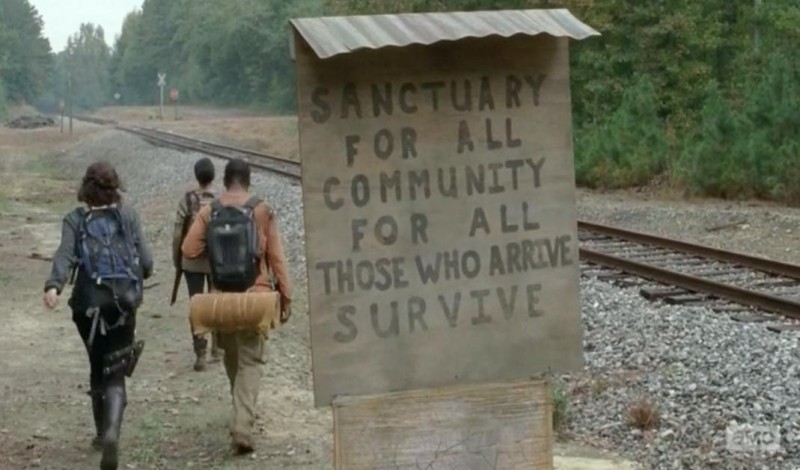 Season four of The Walking Dead sees Rick (Lincoln) and his group start off well. Their prison base is thriving with food production and new residents who are grateful to have sanctuary after Woodbury’s demise. Rick has stepped down as leader to focus on raising livestock and getting his son Carl (Riggs) back on track after he murdered someone in cold blood last season.

Challenges quickly present themselves in the form of a fatal illness spreading through the camp. Several of the dead turn before they can be found leading to a walker outbreak. When two of the ill are murdered and their bodies burned, tempers understandably flare. Rick eventually discovers the culprit and exiles them with a car and supplies.

We find that the Governor (Morrissey) did not die with his town, he instead has been wandering aimlessly. He stumbles across a family in an apartment building that consists of a dying father, his two adult daughters and young granddaughter. The Governor manages to form a relationship with one of the daughters and takes her daughter as his own to protect. When their father dies, the sisters and young girl travel with the Governor. In their travels, they run into his former second, Martinez, and join the camp he has built.

The Governor returns to his old ways, killing Martinez and anyone who stands in the way of his takeover. The Governor finds Michonne (Gurira) and Hershel (Wilson) and takes them hostage. He manages to manipulate the new found group, including his new girlfriend’s sister Tara (Masterson), into approaching the prison where he executes Hershel in front of his daughters and the rest of Rick’s group. The prison is destroyed and the Governor is killed by Michonne having already seen his girlfriend and her daughter killed.

Glenn (Yeun) finds Tara hiding after the attack and, knowing she didn’t participate and that she deeply regrets having allied herself with the Governor, takes her with him. Along the way they meet Abraham (Cudlitz), Rosita (Serratos) and Eugene (McDermitt) — a man who claims to know how to cure the walker infection.

The rest of Rick’s group fled the attack, scattering in smaller groups. They will spend the rest of the season trying to reunite and all manage to find signs leading to a sanctuary: Terminus. On the journey to the Terminus they will be faced with heartbreaking decisions, touching revelations and many, many zombies.

Ding, dong, the villain is dead! Which old villain? The Governor villain! Ding, dong the evil f*cker is dead! It is about time someone stabbed that guy through the heart. Though to be honest, I was a bit disappointed that Rick was getting his butt kicked by the Governor before Michonne stepped up with her fancy sword work. Rick must have been either the best or the worst cop ever, pre-apocalypse.

The most shocking death awards have to go to Lizzie (Sharbino) and Mika (Kenedy), the sisters who thought the walkers were ‘just different’. Lizzie and younger Mika were with Tyreese (Coleman), Carol (McBride) and Judith (infant) when the group was separated. The further they travel, the further Lizzie descends into her delusions about the walkers and has the tantrum to end all tantrums when Carol kills a walker with whom Lizzie was ‘playing’. So naturally, Lizzie stabs Mika and tells Carol and Tyreese that when she comes back it will all be okay. Carol sees Lizzie is not safe to have around and shoots her. Seeing Carol have to once again do what she feels must be done is a marked difference from the battered woman she was when the series began. I may not always agree with Carol’s decisions, but I can’t help but admire her strength and dedication to protecting her new family.

Rick’s formed family are survivors, but I have a feeling next season will see more lost and more found as has become the way of things post-apocalypse.

As a final note, just a reminder that The Walking Dead is not for the faint of heart. This season has faced the murder of two living children, another being killed by a zombie, and yet another having a knife held to his throat while a grown man threatens to rape him then move on to Michonne. In addition to the rest of the murders, gore, zombies and Rick’s hobo beard, the show is definitely not one for the kiddies.

‘So you tell me how in the holy hell did you possibly kill this truck?’
‘A fully amped-up state and an ignorance of rapid-firing weapons.’