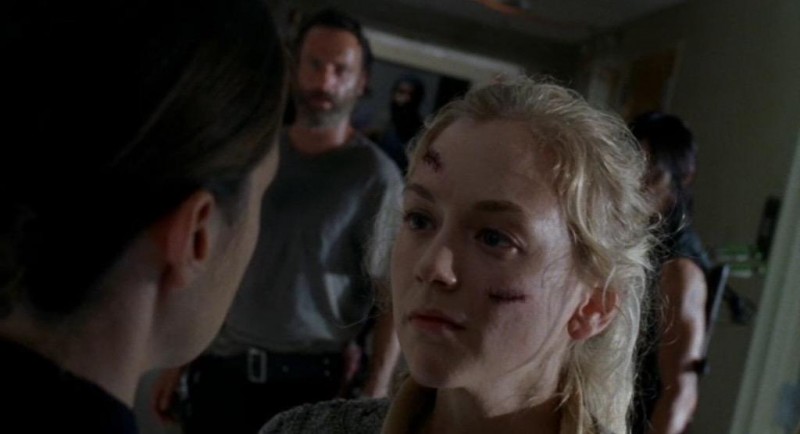 [Spoilers, Sweetie — review contains a synopsis of season, including deaths]

Season five of The Walking Dead begins with Carol (McBride) rescuing the rest of Rick’s (Lincoln) growing group from the false sanctuary Terminus.

Rick and his group stumble across a church with its preacher. The priest has been holed up since the walkers appeared so has led a sheltered existence. This is shattered by Rick’s group of realists and survivors.

We discover that Beth (Kinney) has been taken to a hospital community where she must now work off her ‘debt’ — incurred when they rescued her. When Rick’s group discover where she is and try to rescue her, she is killed.

Rick’s group continue on to DC despite Eugene being found out as a false saviour. They are discovered on the brink of starvation and dehydration by a scout for the community of Alexandria. The scout brings the group back to the community and are welcomed by the mayor after individual interviews.

Rick’s group has trouble fitting in to the sheltered community that has been protected from exposure to walkers by an impenetrable wall. This is made worse by the jobs the group are given, which only leads some of them to realise how naive the Alexandrians are about their own survival.

The differences of the two groups culminate in bloodshed that ultimately unites them.

Season five has produced so many ‘WHAAAT?!’ moments that it is difficult to know where to begin. Let’s start with Beth.

One of the issues I had with Andrea’s death in season three was that she had been such a dislikable character for most of the series but when she died she had suddenly redeemed herself just enough to make her almost likeable. It really stole something from the people (me) who had been rooting for her to become zombie chow for three seasons.

Several of the deaths throughout The Walking Dead have been what I’ve called ‘nothing characters’. They don’t really bring anything to the plot, they’re just there to eventually have a dramatic death.

Unfortunately, Beth’s death was a combination of the two. Sure, she had a couple of pseudo-storylines early on. For the most part, though, she was Judith’s nanny. Then, just as they were about to bump her off, she gained character. She had storyline potential. She became likeable instead of just a background placeholder whose name I often forgot. She was Beth — hear her roar then watch her get shot in the head.

Due to a social media faux-pas from the official The Walking Dead page, I knew Beth was going to die. Did it shock me any less when it happened? No. Did it make my heart break any less for her sister Maggie? No. Or her extended family in Rick’s group? No. It was a sad moment and will remain up there with the deaths of Dale and Hershel as the most shocking from the series.

I have often said that The Walking Dead is not for the faint hearted. There is gore, there is violence and there are hobo beards (sorry, Rick). This season is no different. The moment that stands out most in my mind is when Bob wakes up from being knocked out to find his leg has been amputated, roasted and devoured by a group of cannibals from Terminus. It’s game over for the cannibals though (Game over, man. Game over!) when Bob reveals he had bitten by a walker earlier. I guess they got their … just desserts. (I am SO sorry. Well, kinda sorry. A little.)

[Punny reviewers should be PUNished. — Editor]

Bob was another nothing character. He was given a purpose to stick around but it was only when he was about to be bumped off that his character was given real meaning. In Game of Thrones you should expect any character to die at anytime, even the ones you love. In The Walking Dead you should assume that if you start to love a character you were previously neutral to … well, let’s just say you shouldn’t get too attached.

Another fine season has passed and I’m finally up-to-date. I now have to join the rest of The Walking Dead fans waiting for a new season. Please excuse me while I curl into the foetal position and suck my thumb for the next six months.