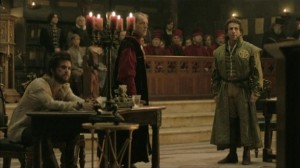 No good deed goes unpunished. During Florence’s aristocratic victory celebration, Leonardo was arrested for sodomy before being imprisoned in the tower. If Rome can’t have da Vinci, they plan to deny Florence the use of Leonardo’s services.

Francesco Pazzi (Elliot Levey, front right in the above image) plans to burn da Vinci for his sexual proclivities, a punishment not meted out for sodomy for 50 years. To inflate the crime, Pazzi prosecutes Leonardo for the rape of Jacopo Saltarelli, a male prostitute who also poses nude for artists.

Levey is quite good looking but, as Pazzi in ‘The Tower’, he’s supercilious, arrogant and over-zealous, exceeding the pope’s instructions. Pazzi is thoroughly unlikable; it was great acting.

Lorenzo de Medici refuses to intercede on Leonardo’s behalf, instead expending his energies wooing King Ferdinand and Queen Isabella of Spain as clients for the de Medici bank, thus shoring up Florence’s economy.

More and more Da Vinci’s Demons reminds me of Cadfael in its humanist solutions to what may, at first, appear as religious conundrums. Da Vinci’s Demons inverts the Cadfael detective tropes, however; instead of solving a crime in this story, Leonardo devises a crime to resolve his difficulties. Thus Leonardo da Vinci is affirmed as the genius, hero and villain all rolled in to one. I hesitate to use the term ‘anti-hero’; it is more accurate to say that Leonardo changes his role as often as he changes his clothes.

That Leonardo had committed sodomy was never in doubt. Although the terminology is never used – it’s not appropriate for the era – it’s clear that Leonardo is bisexual or, at least, bi-curious.

Women feature more in this series as the story progresses and yet Da Vinci’s Demons hasn’t managed to pass the Bechdel Test. The closest it came in this episode was a conversation between Clarice Orsini and Queen Isabella discussing art with a priest present; the priest then issued a dictate that the Queen accepted.

Alexander Siddig (Dr Bashir from Deep Space 9) finally made a reappearance but only as a cameo before the close of the episode. Need. More. Bashir.

The science in Da Vinci’s Demons is all over the shop. Artists had camera obscura in medieval times but using silver nitrate for prints? I’m pretty sure Leonardo invented the Daguerreotype a couple of centuries early in this episode. Likewise, the politics and biographies bear only a passing resemblance to history. Da Vinci’s Demons may inspire fans to research historical records, which are equally fascinating even if rather dry – unless one can find an excellent historian.