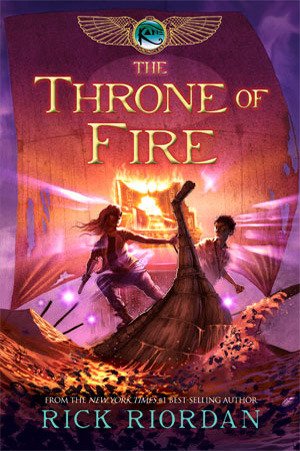 (A mother and daughter reviewing team)

The Throne of Fire is the second book in Rick Riordan’s Kane Chronicles. In the first book Carter and Sadie – a brother and sister team raised separately – find out they are descended from ancient Egyptian magicians and the Egyptian gods have been unleashed on the modern world. Not good.

In the second Kane Chronicles book – The Throne of Fire – Carter and Sadie must stop Apophis from swallowing up the sun and effectively killing the world, in just five days. They must revive the Sun God Ra, a feat no magician has ever achieved, and join the magicians of The House of Life before the whole world is plunged into darkness, forever.

I think The Throne of Fire was a fun book – not amazing, but fun. The witty comebacks, interesting descriptions, hilarious chapter names are entertaining. I enjoyed the switching between points of view. It was good to see more than one side of the story. I found myself giggling while reading the book and I think the humor was one of the best parts of the book.

While The Throne of Fire was a fun book I didn’t find anything really amazing about it. It’s just not one of those books that stays embedded in your memory forever. The characters are too perfect and less relatable than they could be. Riordan wrote ancient gods in the modern world in his previous series, Percy Jackson.

I love to see the kids learning about mythology through fiction but I think Riordan’s Egyptian Kane Chronicles series just doesn’t cut the mustard when compared to his Percy Jackson and the Heroes of Olympus series. The writing lacks rhythm and its teen characters are less relatable – less likeable even.

While The Throne of Fire is an easy read. Instead of being launched into the world of Egyptian mythology headfirst, I was just paddling around ankle deep in the Chronicles.

With Riordan’s original heroes series I was sneaking BB’s books out from under her pillow when she went to sleep and staying up way too late to finish them before she woke. When it comes to the Kane Chronicles I was happy to wait for my copy from the library.