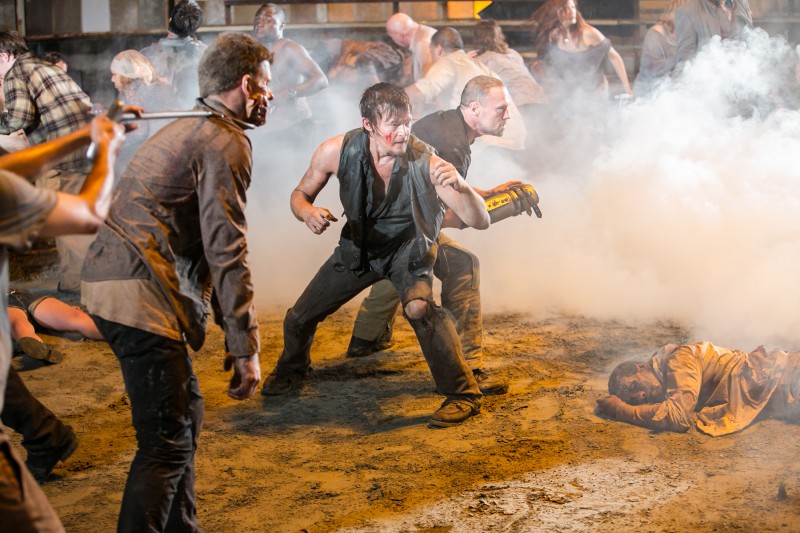 ‘The Suicide King’ begins where the last episode ended — the Governor (Morrissey) demands Merle (Rooker) and Daryl (Reedus) fight to the death. Andrea (Holden) pleads with the Governor but she is ignored. Merle begins to beat Daryl, but it is merely a ruse and the brothers start to fight the zombies together. Rick (Lincoln), Maggie (Cohan) and Michonne (Gurira) arrive just in time to save Daryl and Merle.

After the group escape from the town, a herd of zombies enter the town through their exit.

The group quarrel on the way back as to whether or not Merle and Michonne should be allowed back to the prison. Daryl is the only one who speaks for his brother. When the rest of the group refuse to let Merle come to the prison, Daryl chooses to leave the group and goes into the woods with his brother. Michonne is told her wounds will be tended to and then she is expected to leave.

The townspeople feel unsafe now that their town has been invaded and try to leave but the Governor’s men stop them. The walkers that broke into town that night start attacking and the Governor seems to have abandoned his people until one is bitten. At this he comes out of his home, shoots the man in the head, then returns to his abode without a word.

The townspeople begin to panic without their leader but Andrea steps up. She gives a speech that inspires the people to rally once more.

Rick and the rescue party return to the prison and meet the new arrivals. Hershel tries to convince him they are good people and to let them stay, but Rick is not convinced. As they discuss it, Rick hallucinates his dead wife which causes him to snap.

The episode ends with Rick drawing his gun and chasing the prison’s new arrivals from the property.

I can’t help but to feel so sorry for Rick. He has carried so much on his shoulders and lost a lot along the way, it’s no wonder the poor guy has finally broken.

Daryl has become almost Rick’s lieutenant/deputy/right-hand man. It will be interesting to see how his loss will affect the leader already on the brink.

This episode reunited the group in a sense. Daryl and Merle back together (albeit they first reunited in the closing scene of last episode). Glenn and Maggie returned to the group with their saviours. However, despite everyone being brought together, the group seems more fractured than it was several episodes ago.

I look forward to seeing the guys and gals rallying for their next challenge.

‘I must be the first brother in history to break into prison.’
‘Makes me the first white boy that didn’t want to break out.’