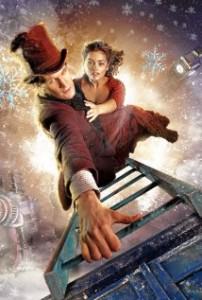 ‘The Snowmen’ opens in 1842 with a boy building a snowman alone, not playing with the other children. A woman is worried about him playing alone and urges the boy to join in with the others.

Fifty years later, the boy has grown up to be Richard E. Grant [Nalini swoons] with a cohort of snowmen at his back.

Enter Matt Smith as The Doctor, studiously avoiding becoming entangled in human affairs again. Clara (Jenna Coleman), an Elisa Dolittle-type cockney-accented barmaid, asks the Doctor if he made the snowman that suddenly appeared outside the door to the inn.

Is the inn a Christmas reference? With a name like the ‘Rose and Crown’, the inn has to be a Rose Tyler reference.

For no apparent reason, Clara chases the Doctor. Hilarity ensues with Strax (Dan Starkey), a Sontaran nurse and the fall guy for a lot of the comedy in this story, threatening warfare and mishandling a memory worm.

Madame Vastra (Neve McIntosh), the Silurian inspiration for Sherlock Holmes, and her human companion-wife urge the Doctor to investigate.

This Christmas special strives to mimic the success of my favourite episode of new Who, the one with the flying fish. The flavour of ‘The Snowmen’ is one of comedy with mild horror and numerous pop-culture references (we heard you say ‘Winter is coming’ the first time).

The Great Intelligence gives the Doctor a business card with the initials ‘GI’ and yet there are no GI Joe-kes. This episode is low-GI, excellent for your diet.

The TARDIS sits on a cloud atop a spiral staircase leading from a public park in London; the scenes where the Doctor and Clara climb these stairs are the most dream-like sequences of this pantomime-styled story.

Set in the Victorian era with children, an evil nanny and an employer in love with the good nanny who is part Mary Poppins and part Elisa Dolittle-post-transformation ticks all the trope boxes; the TARDIS is far from the only box in this episode. The plot doesn’t hold together if carefully inspected, nor does it fit in the series timeline. ‘The Snowmen’ is an episode that is more comedy and pantomime than serious story, providing a feel-good fix for Christmas Day; in this, it is successful.