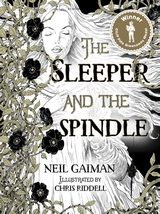 I love hardcovers. Hardcovers are nearly all sexy even when the publisher doesn’t try. In my opinion, publishers have to try hard to make hardcovers NOT sexy. In spite of the inherent sexiness of hardcovers, some are extra-special. The Sleeper and the Spindle is one of the special ones.

The dust-jacket is half-way between transparent and opaque, bearing lettering, briar roses and thorns. Peeling back the dust-jacket reveals a white-with-black-lines drawing of a sleeping woman on a black background. That woman you can see on the cover? She’s showing through the dust jacket. The back cover bears a skull on a black background. Cracking the book open exposes the end-pages, intricate line-drawings like a map but without text marring the landscape.

Pages are coated stock, possibly 150 gsm as they’re thicker than your average magazine page. The front matter — those pages before the actual story — includes drawings, stylized fonts (a cross between gothic and comic fonts) and artistic cobwebs. The printed kind, not the ‘ew, sticky’ kind.

Three dwarfs are walking through a tunnel to cross beneath an impregnable mountain range to buy their queen a wedding gift with a ruby they mined. Because it wouldn’t occur to them to give the queen something they ‘merely’ dug up themselves.

On the far side of the mountain range, the dwarfs meet people fleeing a sleeping plague. The refugees tell a story not unlike that of Briar Rose, colloquially known as Sleeping Beauty. (Seriously, who’d call their daughter ‘Sleeping Beauty’?)

The dwarfs investigate before returning to report to their queen. The queen asks who could survive the sleeping plague. The dwarfs suggest that, as the queen already slept under a spell for a year, she may well be able to stay awake.

This nameless queen, whose story is suspiciously like that of Snow White, sheds her queenly dresses in favour of armor before embarking on a quest upon a horse whose saddle-blanket is adorned with cobwebs and skulls. Did I mention the skull-and-cobweb motif in her bedroom? This chick is definitely part Goth. She also has attitude.

Although the Sleeper and the Spindle is not a graphic novel in the usual sense, Chris Riddell’s two-tone (black and gold on white paper) drawings enhance the reading experience. Sometimes briar roses menacing the text; panels of various shapes and sizes lay alongside text; yet more illustrations surmount double-page spreads. Cobwebs and spiders adorn page numbers for added gothic flavour.

The Sleeper and the Spindle subverts several traditional fairy tales. If you think you know where this story is going — as I thought I did, early on — you will probably be mistaken. The end of the book is a must-read for princesses of all ages. I give the Sleeper and the Spindle 5 out of 5 stars for reclaiming princess tropes in spite of a minor slaughter and sacrifice of the English language.

‘[B]etween the deep cleavage of the pot-girl’s breasts’: I shake my head as Neil Gaiman is personally responsible for an entire generation — possibly more than one generation — not understanding that you cannot be ‘between’ the cleavage of a single woman unless she’s triple-breasted like in Total Recall.