This week, just for a change, starts with Abbie (Nicole Beharie) and Crane (Tom Mison) attend a baseball game THEN Abbie has a dream. Just to be different. WHILE DRIVING.

Abbie goes to Katrina’s parallel world where, for a change, she’s in a facsimile of her home with Crane instead of in the forest. Wow, this episode is really breaking the mould.

FYI: I love the dialogue at the baseball game. Crane thinks it’s pointless. Abbie explains baseball in terms of the American constitution. Crane is sold.

Crane visits his wife’s tombstone in the graveyard where a black man in a suit tranquillises him with a blow dart and puts a bag over his head.

Abbie has a nightmare where she meets Katrina who tells her to find the sin eater to separate Crane from the headless horseman.

Abbie calls on Jenny to get her out of hospital to call upon her Sarah Connor–Hogwarts training.

“Sin Eater” are the magic words to get Jenny to help.

Crane recognizes the descendent of someone he knew, both of whom are Freemasons. The Freemasons want to verify Crane’s identity.

Crane as a red coat is interesting, especially when confronted by his wife-to-be. Now we know why Katrina (Katia Winter) didn’t like him at first sight. She declares herself to be a Quaker and demands to treat the black prisoner, Arthur Bernard (Tongayi Chirisa), and yet no one asks how she came to be in the prisoner’s house with the redcoats.

Jenny (Lyndie Greenwood) briefs Abbie about the sin eater guy who does the sanctifying.

At a hanging Crane stands up for mercy.

Katrina, the alleged Quaker, has a low cut bodice. Very low cut for a Quaker. Artistic licence much? It makes me wonder how many of Crane’s lines are researched and not just made up because “fun”.

Abbie and Jenny find the sin eater but he’s on sabbatical because he was going to be swallowed by other people’s sins. The sin eater is Henry Parrish (John Noble) but he doesn’t have a slobbery feast, dripping tomato juice down his chin while greasing up on succulent meats while sending people to die. Not this time, anyway.

He touches Abbie, gives her a couple of very vague clues with which she suddenly knows how to find a door that she’s never seen before.

Meanwhile, back in the past, Crane’s about to shoot Bernard on a demon’s orders. When he delopes, Bernard gives him intel then the demon shoots Bernard and comes for Crane. He looks like a blue Orc. More redcoats appear so the Orc/demon/redcoat captain runs away.

Crane wakes up in Katrina’s care.

Crane confesses that it’s his fault Bernard died because he didn’t act sooner.

The other Freemasons suddenly accept Crane’s identity because Katrina wrote a ledger telling Crane’s story. Crane realizes his wife hid him for the Freemasons to keep him safe although he wasn’t hidden when he was a bluecoat AFTER all these events, he fought. The Freemasons want Crane dead to ensure the Horseman’s rein is over. Or is that reign?

Abbie rocks up to free Crane but Crane is determined to use the contents of a black box to end the Horseman.

After a “moving” discussion with Abbie, Crane drinks a potion that looks like blood diluted with water. Then the sin eater reappears as do the Freemasons. Suddenly Parrish wants to help. He says he can remove the poison and Crane’s sins. Convenient. The sin eater summons Arthur Bernard to absolve Crane of his sin. The horseman feeds on your regret…. Which is the total sum of Death’s power over Crane and their blood tie. Anticlimax much?

Crane recites some magic words and is free. Blood flows uphill, blood separates my itself. The Sin eater eats bread soaked in the blood.

The Sin Eater does not die. Am disappoint.

The horseman comes from Crane but they’re ready…. For the headless horseman aka death. Who visits Crane’s grave to get his hands dirty and “see” Crane rising from the dirt. 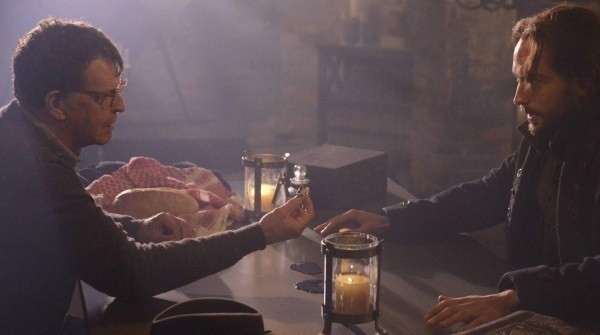