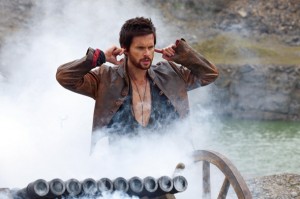 Leonardo Da Vinci is up to his usual tricks, failing to live up to the terms of his commission – creating a repeating cannon – while pursuing other interests. Da Vinci’s father exults, anticipating Da Vinci’s imminent demise: capital punishment for failing to fulfill a commission to Lorenzo de Medici, the ruler of Florence.

Intelligent yet unwise, Leonardo pursues the Fountain of Memory and the mythical Book of Leaves, making excuses that this mystery is somehow connected to his missing mother.

As Da Vinci comes to the attention of Riario, the spy and son of Rome, Da Vinci’s manservant is captured and tortured.

Leonardo draws his lover. Married to one aristocrat, bedding Lorenzo and now Leonardo, Lucrezia Donati is now revealed as a spy for Rome.

The Serpent of the title is linked to an insult given at a feast for nobles.

Costumes and scenery are sumptuous. The former are gorgeous, the latter unconvincing on green screen. When engaged with the plot, who cares about green screen SFX?

Da Vinci failing to test his repeating cannon before showing it to his patron was spectacular but stupid, unworthy of any scientist, especially since Da Vinci’s life depends on Lorenzo de Medici’s goodwill. The Serpent mostly held together plot-wise though.

HBO has a reputation for gratuitous nudity (at least of the women) with which Da Vinci’s Demons seems intent on competing. Not only are there sex scenes but in the Serpent acrobats perform for an aristocratic party wearing only paint and a literal fig leaf.

Da Vinci’s Demons uses the enigma that was Leonardo Da Vinci as the basis for a historical fantasy. The story is off and running, incorporating Da Vinci the genius and arrogant young man, father issues, romance, mysticism, politics, intrigue and more.

Thanks to Roadshow for the review copy.