The Refugees is a science fiction TV series about people from the future transporting themselves into the present “because we had no choice” and how a small town copes with the refugees.

Initially I thought this sounded promising, especially with current attitudes towards refugees, but this series promises to reinforce fear and prejudice while faffing around with flawed storytelling.

THREE BILLION people suddenly appear on Earth. This is a planet already struggling with its existing human population. Assuming the transportation event and added weight of all these additional parasites didn’t cause a catastrophic event, the inevitable consequences are famine within days and violence causing the death of billions. Then there’d be the cleanup, if enough people survived for long enough to even attempt a cleanup.

The overwhelming weight of numbers of real refugees feeds current fears: Australia, Europe and the US (for example) fear being overrun so they want refugees to stay in countries where we are bombing them and children lose lives and limbs playing harmless games when land mines explode. The Refugees sets out to reinforce those fears with its basic worldbuilding.

A farming family head into town and witness two of their friends yanked out of cars and carted off to concentration camps because their descendants from the future contacted them. The officials were also from the future. So The Refugees has the equivalent of Sharia Law being imposed upon the contemporary country, reinforcing yet another fear of refugees.

The reason for imprisonment: the descendants contacting their ancestors might change the future. Seriously. LIKE THE FUTURE WASN’T CHANGED WHEN EVERYONE TRANSPORTED BACK IN TIME.

If the world faced such a catastrophic event that the entire population of the planet had to transport back in time, WOULDN’T YOU WANT THE FUTURE CHANGED?

Emma (Natalia Tena) is a farm-wife who’s almost Japanese-anime in the way she goes from neutral to ranting that she wants their refugee resident off the property. Then her husband discovers their refugee, Álex (David Leon), has buried stolen guns in the woods. Instead of turning Álex out and calling the authorities, the couple listen to him explain how he’s been sent back from the future to protect them during a murder attempt that will/did take place that very night. So convenient. And as if events haven’t already changed because of the arrival of the refugees.

HAVE THE WRITERS READ ANY TIME TRAVEL STORIES? AT ALL?

They believe Álex for no apparent reason and sit at the kitchen table to discuss their imminent murders and plan ahead. If I could have thrown things at the screen without risking damage to my television, I would have.

The Refugees has broken world building that cannot be fixed with later episodes and will only become more complex and more frustrating over time. Plus it’s inherently xenophobic, feeding into the West’s worst fears of refugees as well as being incredibly WHITE even though it’s a story about refugees. I watched the pilot, which felt excessively long. Not even Natalia Tena can carry that script, awesome as she may be. 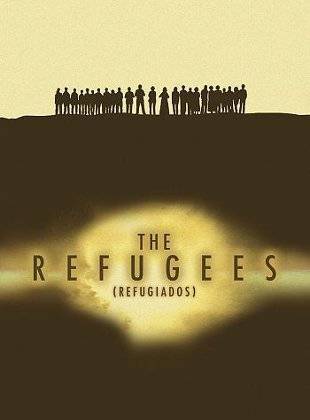