‘The Rains of Castamere’ is a song commemorating the destruction of the House of Castamere by Tywin Lannister. It has nothing to do with this episode, no, nothing at all. [shifty eyes]

So… This zode we see Jon Snow arguing with the Wildlings not to murder an old guy but they have to have blood for their pudding.

After a whole extra season with Rickon, he’s finally heading off with Osha to visit some banner men. I wonder if they’ll look after him? Will they disguise his identity? Because that’s the only way he’d be likely to get out of this alive. Unless, of course, GRRM forgets to tie up a loose end.

I guess Rickon could be the Game of Thrones version of Charles Stuart vying for the throne from Europe. Which does not bode well for the curly-haired blue-eyed urchin.

Daenerys is in luuurve with dimples, aka Daario. Jorah Mormont is jealous, especially when she only has eyes for dimples after Jorah, Grey Worm and Daario all risked their lives to win the city.

Samwell and Gilly wander on, ever onwards, no food, no supplies, but they trudge on towards without complaint to an abandoned castle in the hopes of making their way through the wall and to safety. Because Samwell is like a WIZARD, knowing things from marks on paper.

The TV series doesn’t show Rob Stark’s wolf refusing to go into the Frey hold. He snapped and snarled before being penned.

Waldo Frey offers stale bread and soggy salt as the sacred ceremony promising safety for his guests. His daughter that he gifted to Edmund Tully as a wife is the only beautiful one of the bunch. We see all the single Frey women as if they’re horseflesh paraded for us to evaluate their worth. Game of Thrones undermines decades of feminism in every episode.

I hope the series doesn’t follow the books with regards to Catelyn Stark: it’s overdone, melodramatic horror/high magical fantasy for the sake of filling pages, adding nothing to the overall story arc up to A Dance With Dragons. Please don’t bring her back.

Don’t tell me about Brienne and Catelyn’s encounter in the later books: it is TOTALLY UNNECESSARY. God deliver me from writers who don’t know when to stop. It’s like taking a medium rare long-cooked steak and turning it into charcoal on the outside and leather on the inside.

No, just leave Catelyn at the end of episode 9, having made her peace with Rob and his wife, having loved and lost and laid to rest.

And Arya? Her relationship with the Hound becomes more complicated. In spite of myself I have to love him: he’s ugly, he’s rough around the edges — and through the middle — but he has a heart of gold.

He rescues Arya after she sees Rob’s wolf murdered along with several Stark men.

ONWARD to the final episode of Game of Thrones season 3…. 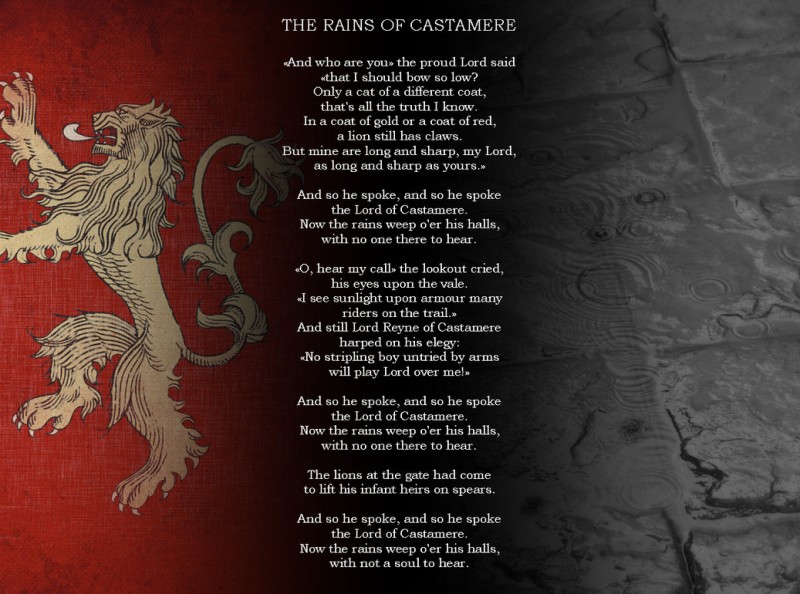