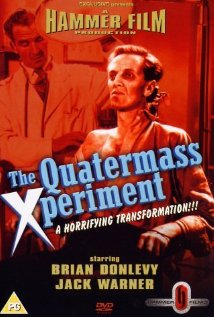 In 1955 Quatermass, a British scientist, defied his supervising committee to launch a rocket into Outer Space [dun, dun, DUNNN]. This is The Quatermass Xperiment. Apparently Quatermass’s funding committee couldn’t cover costs for the ‘E’.

The first we hear of this rocket, it’s plummeting through the atmosphere, threatening a couple of lovers rolling in the hay. Literally. They’re in loose hay next to a hay stack. Obviously this farmer is incompetent when it comes to baling hay.

The lovers see — something, and run inside. There’s a crash. The roof comes down inside the cottage. The boyfriend forcibly holds his girlfriend inside while her father goes outside, alone, to find — a rocket impaled upside down in his field. Actually, the ground is impaled, the rocket is just upside down. In the dirt.

Officials arrive, driving through streets in ancient cars — [cough] — Officials arrive, driving through streets in state-of-the-art fire trucks, cars, a combie van and a tow truck. A car with speakers on the roof broadcasts messages that ‘there’s nothing to see, you’re hindering investigations, go home’. So people rock up down at the farmer’s field wearing pjs and bath robes to watch the car crash. Um, the rocket crash.

Eventually the rocket is opened to find 2 astronauts missing and one seriously ill. Quatermass and the police investigate.

This movie is so old I wonder if it’s the source of sayings like ‘he’s cactus’ when he’s dead. An electric shaver was used very casually on screen as if to say ‘this is the way of the future, look how high tech we are’.

And yet, The Quatermass Xperiment was so casually sexist and white that it was—alien. Women were nurses except when there was a serious case when male nurses were assigned. A woman sees something yucky and goes insane because poor fragile female. Women cook their men meals and fuss around after them but gods help us if they have a thought for themselves. I don’t think I saw a non-white person in the entire film. It was 1955.

The zoo was amazing and horrifying. The front gates of the zoo were so low you wouldn’t need to jump to get over them; it was funny that the side door was even locked! The animals were there in full, emphatic display… in tiny cages with flagstones or floorboards instead of natural floors. I’m glad we don’t have zoos like this any more and yet this movie shows us how the 1950s really were, taking so much for granted.

The evolution of the alien life-form was well done, especially considering the era in which the movie was made. Mostly the cinematic techniques rely on not showing to increase the horror element (think The Empire Strikes Back monster on Hoth before George dumbed it down and added more monster). Close-ups during the climax were probably a feature of the film, enhancing the horror. Not so much now, but even Joss Whedon got away with cheesy monsters in the late 1990s and early 2000s in Buffy and Angel.

Although The Quatermass Xperiment didn’t have a sub-plot, its one lonely plot progressed at a reasonable pace, Quatermass and the police hunting down a threat to the human population. It’s interesting to see science fiction interpreted as horror that is, well, not very horrifying nearly 60 years later. However, it’s an engaging movie that kept my interest from both a plot perspective and an anthropological Life on Mars perspective. The Quatermass Xperiment is an iconic work, a must-watch for those exploring the history of science fiction in cinema. Also, the Quatermass movies may shed new light on references and spoofs in subsequent science fiction TV and movies.

Extras include X the Unknown and Quatermass II, both are black & white movies.