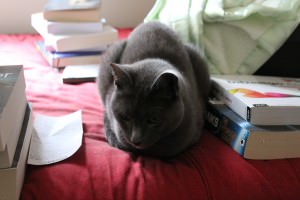 Yesterday the minion took Smokey to the vet.

Today Smokey is thoroughly traumatised, spending far more time than usual nestled in between the stacks of books in the ‘office’.

To add insult to injury, today the Pikachus are breeding. What can I say? It’s CHRISTMAS. 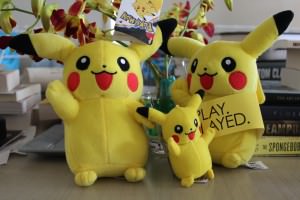 While Smokey was minding her own business sitting on the Christmas wrapping paper I’d left out, waiting to wrap Pikachu #2 for – someone – Pikachu #3 joined Smokey on the wrapping paper. 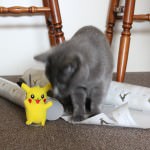 Smokey: What EXACTLY do you think you’re doing? 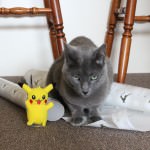 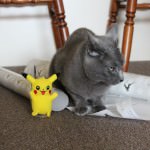 Smokey: I am not impressed. 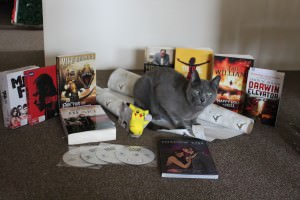 I’ve already seen seasons 1 & 2 so expect a review of them soon. I’m looking forward to seasons 3 & 4 of this quirky paranormal comedy/drama from the BBC.

This 7-disc box set includes all episodes from Series 1 – 3 of the multi-awarding winning Misfits along with loads of special features including two Short Films and a Stunts and Special Effects Featurette. Kelly, Nathan, Curtis, Alisha and Simon are five unruly teenagers forced to do community service as payback for their crimes. When a freak electrical storm hits town they suddenly find themselves with strange superpowers: hard-as-nails Kelly discovers that she can read minds; disgraced sporting hero Curtis can turn back time; party-girl Alisha can send people into a sexual frenzy with one touch and painfully shy Simon can turn invisible. Smart-alec Nathan is miffed as he seems to be the only one of the gang who doesn’t have a super-power; he’s sure he’s got one, he just doesn’t know what it is yet. Unlike their more conventional counterparts, our misfits don’t swap their mobile phones and ankle tags for capes and tights. Instead, they discover just how tough life can be when you’re all that stands between good and evil.

Daniel Haynes (Starcraft gamer) sat me down and forced me to watch Luther‘s pilot . Although it was very good, up until receiving this boxed set I hadn’t watched any more. I’m a few episodes in now so I understand why Dan has watched the entire series twice over. Expect a review soon.

John Luther is a maverick detective working for London’s Serious Crime Unit in this gripping, intelligent and hard hitting drama. Luther is a dedicated policeman, an inspired maker of connections and a whirlwind genius. He is dazzling, obsessive and sometimes dangerous in the violence of his fixations. This collection features all three explosive series which sees Golden Globe award-winner Idris Elba play the lead role superbly and features an excellent supporting cast, including Ruth Wilson, Warren Brown and Steven Mackintosh.

Luther has a micro-site all its very own.

The doctor and the Dinosaurs by Mike Resnick

This is the second in this series; Rebecca previously reviewed The Doctor and the Rough Rider.

The time is April, 1885. Doc Holliday lies in bed in a sanitarium in Leadville, Colorado, expecting never to leave his room again. But the medicine man and great chief Geronimo needs him for one last adventure. Renegade Comanche medicine men object to the newly-signed treaty with Theodore Roosevelt. They are venting their displeasure on two white men who are desecrating tribal territory in Wyoming. Geronimo must protect the men or renege on his agreement with Roosevelt. He offers Doc one year of restored health in exchange for taking on this mission.

Welcome to the birth of American paleontology, spearheaded by two brilliant men, Edward Drinker Cope and Othniel Charles Marsh, two men whose genius is only exceeded by their hatred for each other’s guts.

Now, with the aid of Theodore Roosevelt, Cole Younger, and Buffalo Bill Cody, Doc Holliday must save Cope and Marsh not only from the Comanches, not only from living, breathing dinosaurs, but from each other. And that won’t be easy. I’m REALLY interested in reading this. Unless you’ve been hiding under a rock for over a decade you’ve probably heard about the Sopranos, Deadwood and Game of Thrones to name but a few water-cooler series from HBO. It’ll be interesting to read more about the network responsible for these iconic TV shows.

No advertisers to please, no censors to placate, no commercial interruptions every eleven minutes, demanding cliffhangers to draw viewers back after the commercial breaks: HBO has re-written the rules of television; and the result has been nothing short of a cultural ground shift. The HBO Effect details how the fingerprints of HBO are all over contemporary film and television. Their capability to focus on smaller markets made shows like Sex and the City, The Sopranos, The Wire, and even the more recent Game of Thrones and Girls, trigger shows on basic cable networks to follow suit. HBO pioneered the use of HDTV and the widescreen format, production and distribution deals leading to market presence, and the promotion of greater diversity on TV (discussing issues of class and race).
The HBO Effect examines this rich and unique history for clues to its remarkable impact upon television and popular culture. It’s time to take a wide-angle look at HBO as a producer of American culture.

This is the third in Katie’s second trilogy, a dark fantasy where griffins are arrogant and selfish, using humans to meet their needs. I was impressed by Katie’s creativity and her dedication when I interviewed her; she was already up to novel 12 in the series! Fans don’t need to worry about being let down mid-stream with this author. There is nothing quite like a complete story – like this trilogy – to inspire me to get stuck in over summer.

In the aftermath of civil war, Queen Laela must do whatever it takes to maintain control of her kingdom. With Arenadd gone and her own griffin partner Oeka lost to magic, Laela joins forces with the dark griffin Skandar to secure her hold on the throne and attempt peace between the North and South. But Saeddryn’s son Caedmon is still determined to claim the throne himself – and this time he has help from the most unlikely of quarters. Meanwhile, as Kullervo rallies the South in support of his sister’s peace treaty, he embarks on his own journey of self-discovery and must decide what he truly believes in … and what he’s willing to fight for. With the Night God plotting Laela’s destruction, old enemies rise again. The battle for the North is reaching its final stages – but who will win? And at what cost? This is a high-quality graphic novel of a Vampire Academy story. Although the copy I received is paperback, the page paper quality is excellent and the colour range vivid. Elizabeth Manthos is itching to get her hands on this to review!

What if following her heart means Rose could  lose her best friend forever?

A strange darkness begins to grow in Rose’s mind, and ghostly shadows warn of a terrible evil drawing nearer to the Academy’s iron gates.  The immortal undead are closing in, and they want vengeance for the lives Rose has stolen.  In a heart-stopping battle to rival her worst nightmares, Rose will have to choose between love, life, and the two people who matter the most . . . but will her choice mean that only one can survive? 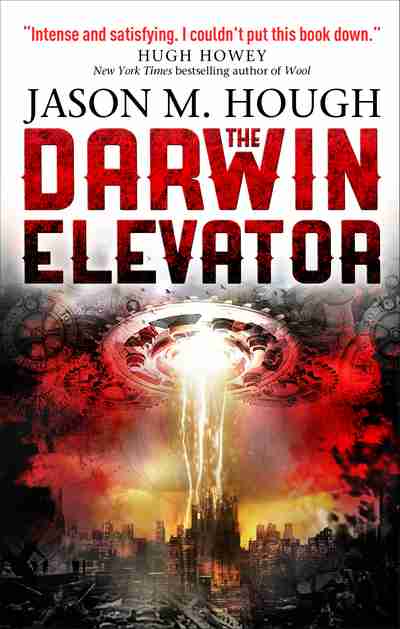 An intriguing idea: aliens built this elevator from Darwin into space. Then they left. Humanity, like the parasites we are, used the elevator without fully understanding the technology. Suprisingly  the technology fails.

After aliens constructed an elevator from Darwin, Australia into space, humanity established orbital colonies along the elevator’s cord. When the elevator’s virus shield begins to break down, a scavenger and a scientist must unravel the mystery of the failing alien technology to save what’s left of the world.

Following on from Dirty Streets of Heaven, a Colombo-esque angel-detective story that I thoroughly enjoyed, Happy Hour in Hell takes Bobby Dollar, the aforementioned angel, to Hell. I confess I read this before getting around to putting it up here as received – the review will be published on 28 December 2013.

Happy Hour in Hell is in the same vein as Dirty Streets only darker because, well, HELL. Williams ramps up the stakes and throws some Origen-al theology into the mix to sharpen the plot. I’m looking forward to the next installment.

Tad Williams says: “The first three BD books go together, yes — the third will be called Sleeping Late On Judgement Day — but then I intend to continue the books as an open-ended series.”

This is Tad’s second urban fantasy novel – a mixture of noir fantasy, mystery, humour and eroticism.

Bobby Dollar has a problem or four of epic proportions. Problem one: his best friend Sam has given him an angel’s feather that also happens to be evidence of an unholy pact between Bobby’s employers and those who dwell in the infernal depths. Problem two: Eligor, Grand Duke of Hell, wants to get his claws on the feather at all costs, but particularly at all cost to Bobby. Problem three: Bobby has fallen in love with Casimira, Countess of Cold Hands, who just happens to be Eligor’s girlfriend. Problem four: Eligor, aware of Problem three, has whisked Casimira off to the Bottomless Pit itself, telling Bobby he will never see her again unless he hands over the feather.

But Bobby, long-time veteran of the endless war between above and below, is not the type of guy who finds Hell intimidating. All he has to do is toss on a demon’s body, sneak through the infernal gates, solve the mystery of the angel’s feather, and rescue the girl. Saving the day should just be a matter of an eon or two of anguish, mutilation and horror. If only it were that easy.

The Girl with All the Gifts by M R Carey

A terrible, wonderful, heart-breaking story about hope and humanity and a young girl who tries to save the world.

Melanie is a very special girl. Dr Caldwell calls her ‘our little genius’.

Every morning, Melanie waits in her cell to be collected for class. When they come for her, Sergeant keeps his gun pointing at her while two of his people strap her into the wheelchair. She thinks they don’t like her. She jokes that she won’t bite, but they don’t laugh.

Melanie loves school. She loves learning about spelling and sums and the world outside the classroom and the children’s cells. She tells her favourite teacher all the things she’ll do when she grows up. Melanie doesn’t know why this makes Miss Justineau look sad.

M. R. Carey is a pen name for an established British writer of prose fiction and comic books. He has written for both DC and Marvel, including critically acclaimed runs on X-Men and Fantastic Four, Marvel’s flagship superhero titles. His creator-owned books regularly appear in the New York Times graphic fiction bestseller list. He also has several previous novels and one Hollywood movie screenplay to his credit.

Immerse yourself in a total celebration of all that is Doctor Who. These unique documentaries explore Doctor Who through the ideas and moments that make the series such an unforgettable experience. Be awed by the artistry and imagination of the series’ most iconic monsters, take an in-depth look at the Time Lord’s trusty companions, Amy, Rory and River Song, gather a new perspective on the perplexing and confounding paradoxes of time travel; and venture beyond the known universe for extra surprises, facts and theories that could fill the TARDIS.

A must-have for every fan, this collection will expand your knowledge and increase your appreciation for the universe of Doctor Who.

As soon as I receive the Roadshow link to this set I’ll update this post, adding the cover art and the link for everyone to clicky-clicky.