Prologue. The Nobody People – or one, at least – saves the lives of his workmates trapped down a mine. To thank him, and because he’s different – superpowered – a lynch mob of 20 men come to his house to murder him and his family. Niiice. But believable, after seeing MAGAs over the past 5 years.

Chapter one. A phone call from an informant at Homeland Security wakes Journalist Avi Hirsch with a phone call. Louis wants answers after a two bombings with the same unbelievable MO. A spherical hole in a mall and then a church. In different cities. With no debris. Homeland officer Louis is stuck.

Avi locates the bomber and, in doing so, is drawn into the world of the supes, called Resonants, who are about to come out of the closet. They choose Avi because his daughter is a Resonant.

The short version of this review: I give The Nobody People 3 stars. It’s a feminist superpeople vs mundanes story, very James Cameron’s Dark Angel second season, with the failings typical of many feminist novels. Proehl weaves loads of fan services into the story that are particularly noticeable early on.

If that’s what you came for, sayonara. If you want more information, read on MacDuff.

For the next little while (from the beginning of chapter one) we follow Avi, who appears to be the central character. Much later other characters come to the fore but we don’t follow any as closely as we did Avi. Early on, the story unfolds almost seamlessly but later the style changes, it becomes more like the TV series Years and Years while the reader catches up, trying to fill in the blanks.

Once the first sympathetic character dies, especially when it’s in the Prologue, it’s difficult to engage with the next one. Proehl dangles Avi before us as bait, inviting us to engage with him, then does a bait-and-switch. The problem is, once Proehl sidelines Avi, there’s no central character any more. He feeds us snippets, postcards, from various characters, requiring reader effort to string them together like sorting then stringing beads.

Because of this, The Nobody People can be split into two sections. The first section was more engaging. It’s almost like there were two different writers. I suspect the author became bored with Avi and possibly even started hating him. Which would explain a lot.

The Nobody People and minorities

Largely the Nobody People is a feminist novel where the author speaks up for minorities, especially people of color, queers and Muslims. At times I felt Proehl was spoofing the Trump years. For example, a comment about being one drunken rampage away from date rape evoked Kavanagh’s pre-SCOTUS hearing. However, subtlety be damned: Proehl uses superpowers to stand in for race, laboring the point when his characters use this analogy in their arguments. Repeatedly.

Several key characters are queer, including a Muslim woman who explores her sexuality in flashbacks that explain how she arrived at this place. Although she’s a sympathetic character, she slides between personas. Sometimes she’s a lovely person, sometimes she’s a machine-obsessed introvert. To be human is to be riddled with contradictions but it seemed she was two people unevenly melded together. When she was introduced as more than wallpaper, I was flailing, drowning, looking for someone to string the story together for me but her inconsistency was disconcerting. Also the way her character was fleshed out felt like The Witcher season 1: disjointed.

In contrast, Proehl’s representation of disability starts well then goes down the crapper.

In Avi’s opening scenes we learn he’s a relatively recent amputee, that he lost a leg while embedded as a journalist in the Middle East. Scenes of engaging with his prosthetic, delving into related emotions, and struggling with a ladder were both realistic and concerning. Realistic because of the benefits and problems of dealing with an artificial body part. (Although I have grave concerns about this “click” that Avi supposedly hears when his prosthetic attaches correctly. He’s human not a Lego man!) Anyone who wears glasses or contact lenses has experienced difficulties. Now imagine having those issues but with a prosthetic leg, on which you rely for mobility. Relate that to a new pair of shoes that rubs and causes blisters and we’re part-way to empathizing. Ow!

When we meet Avi, his internal dialogue includes cracking jokes about his disability, prosthetic, etc. This showed – I thought – some healthy movement in his character arc. That dialogue was not unlike The Last Leg gents cracking jokes.

However, it’s been a couple of years at least since the bomb that cost Avi his leg. He still doesn’t seem to have good days. Even his jokes have a mournful resonance, almost blaming his wife because she’s not cracking jokes with him. And I thought his description of her reaction to his jokes spoke to her discomfort. If she’s that uncomfortable with his disability that, after a few years, she can’t joke along with her husband, then something is rotten in the state of Denmark.

Although overtly Proehl’s narrative blames Avi for the demise of their relationship, his wife’s reaction to his disability is very familiar to many people who’ve acquired disabilities. Just check out some Facebook support groups some time. Proehl’s empathy is reserved for the able-bodied.

Disabled does not mean incapable – in real life

Although Avi has grown accustomed to using the prosthetic and, as such, is mobile, he still thinks his wife could attach the leg better than he can. Nope. Who here likes someone else putting their glasses on for them? How about putting shoes on?

Avi blames himself for the accident. When we finally see the scene through Avi’s eyes, perhaps he is – to a point – responsible. He was certainly reckless. However, Proehl paints Avi’s history with the bomb as the story of an adrenaline-junkie suicidal reporter who won’t be happy until he’s found another bomb to blow himself up completely. This is spelled out early on. Avi doesn’t change or grow as a person from there.

The Nobody People started well but deteriorates into Paul Darke’s Normality Genre. This is poor representation: representation of disability for the nondisabled gaze where the disability is self-inflicted, caused by a personality defect that foreshadows his future. Shades of Gattaca. Although I thought Gattaca was a brilliant movie, from the scene introducing the wheelchair user suicide attempt survivor, I knew how that movie would end. Discussion of social issues was good but representation of disability was appalling. Same here.

The Nobody People deserves 2 stars for representation of disability: it was an excellent start that was then shat upon and trekked through the pages of the novel.

Proehl is clearly a long-time speculative fiction fan, sprinkling loads of references to other stories – both books and screen – throughout. His familiarity helps him dance around many of this genre’s pitfalls.

This novel embodies the class and race warfare that has raged in America for centuries and been exposed by Trump, Murdoch and co whipping up the masses. Sadly, like many feminists, Proehl seems to have taken the “traditional” stance that women, people of color and Muslims are worthy “unlike disabled people”. As I said earlier, for those who didn’t want the in-depth commentary, I give The Nobody People 3 stars overall and 2 stars for representation of disability.

But don’t worry: the other reviews I read were wholeheartedly positive while admitting the story is dark.

Read this story if you enjoyed The Boys. 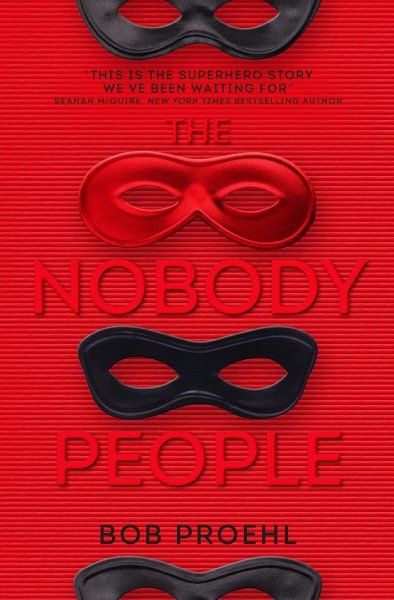