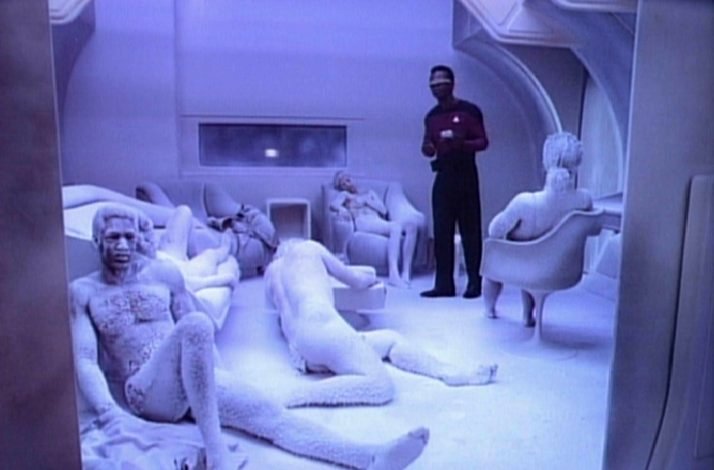 The Enterprise is visiting a science vessel observing a red gas giant about to collapse into a white dwarf. (Because, when red dwarfs, “Everyone’s dead, Dave.”) As the Enterprise approaches the science vessel, they’re hailed by someone talking unprofessionally, almost as if she was drunk on duty.

Lieutenant Data (Brent Spiner) says the bang sounded like a hatch being blown.

Although a hatch was blown, killing the crew and leaving a vacuum in the ship, the away team doesn’t bother with space suits. They’re too cool for school, strolling around in the non-vacuumy air in the ship as they investigate, finding frozen crewmembers because heat bled away into space; apparently someone played with the environmental controls, killing them all. Except for the ones they don’t find that they magically know were blown into space. From that other part of the ship where the vacuum lingers.

La Forge (LeVar Burton) opens a shower and catches the womsicle (woman-icicle) who falls into his arms, dusting La Forge’s uniform and hands with ice. And a virus. Except it’s not a virus. And it’s not limited to biological life forms.

Shame it didn’t infect the ship. Imagine Majel Barrett as the ship’s intoxicated voice, tormenting Picard as she torments both Picard and Sisko when playing Troi’s mother… Shut up and take my money!

(Before someone writes in to tell me: Majel Barrett died in 2008.)

The digital re-mastering is finding its feet in this zode, with character’s makeup settling into ranges of normal, becoming less distracting.

The exterior of the ship looks fabulous although I have to say that those portholes, in particular the ones on the underside of the saucer section, would have to extend to at least 2 floors. I mean, compare their length with the thickness of the saucer rim. I never noticed that before… the joys of a large screen and digital re-mastering! Such clarity! Much Doge!

Doge are jealous because Data has a cat. Actually, Data’s cat hasn’t made an appearance yet so I’m jumping ahead of myself.

Several shots focus on female crewmember’s rears, their shoulder-blades at the top of the screen, their knees at the bottom. At first I thought we were supposed to be focusing forward, seeing who was coming towards the screen. I soon realized the focus was on the perky butt wiggling its way through the Enterprise‘s corridors.

When she succumbs to the intoxicating virus, Tasha’s (Denise Crosby), um, “seductive” outfit was a mind-bender. Her hair is plastered down with a Superman curl on her forehead above heavy makeup. Her neckline is high and her shoulders upthrust as if she’s frozen mid-shrug. Her head and neckline sharply contrast with her visible under-boobage and bare belly in her pseudo-belly-dancing costume.

Apparently even Data is susceptible to the lure of his small brain, that third leg that proves he is “fully functional in multiple techniques”. Tasha was, apparently, satisfied with his performance.

Wesley Crusher (Wil Wheaton), the perky teenage perky boy… In the pilot episode, Wesley is practically introduced with a fanfare and blazing spotlights overshadowed only by the neon lights and can-can chorus singing “Girls! Here’s your heart-throb! Geek boys! Here’s your shiny-faced self-projection!”

In “The Naked Now” Wesley sabotages the ship, helping a crewman sabotage it further and preventing the slightly-more-sane crew from setting things right before chunks (that’s right, CHUNKS) of red gas giant come hurtling towards them.

So, naturally, Picard rewards him.

“The Naked Now” serves as homage to Classic Trek, a fact of which viewers are reminded. Repeatedly. As the second episode of the series, “The Naked Now” works to expand upon characters by revealing their hidden desires and motivations including the Imzadi storyline (Troi [Marina Sirtis] and Riker [Jonathan Frakes] previous romance) and Picard (Patrick Stewart) and Crusher’s attraction. Crusher senior (Gates McFadden); junior would be squicky. Get your mind out of the gutter.

Again, I was surprised at how well “The Naked Now” held together and how watchable it is. Today’s science fiction TV should be using Star Trek the Next Generation as a minimum bar and seeking to raise the bar further, not lower it.