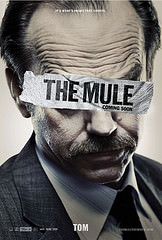 The Mule will become available first ‘on digital’ from Entertainment One on 21 November 2014.

Based on a true story, The Mule is set in 1983, following Ray Jenkins’s (Angus Sampson) descent from the dizzying heights of television repair into the drug world where he becomes — you guessed it — a drug mule, bringing 1 kilo of heroin into Australia from Thailand.

Ray plays footy, ending his club’s season — all 4 wins — as clubman of the year. The club’s boss-man (John Noble, who plays villains so very well) decides Ray should go to Thailand on the footy tour. And that Ray should help Gavin (Leigh Whannell) smuggle drugs into Australia. Ray holds out against them until they start to threaten his mum (Noni Hazelhurst).

Hugo Weaving plays a federal police officer who is a raging misogynist — think Life on Mars — and his moustache is hypnotic. I recommend watching this movie just for Hugo Weaving and his moustache. It’s so very wrong to see Elrond and Agent Smith with that facial growth.

Increasingly movies portray a glossy nostalgic view of the 1980s but The Mule goes history—black comedy. The Mule encapsulates the early 80s better than feel-good movies like The Wedding Singer (although I confess to enjoying TWS). Sitting through the movie, I kept wondering how much of it I remembered; did I remember hearing about the mule on TV? The end surprised me so I guess my primary memories are of the yacht race and the soundtrack.

Austen Tayshus‘s soundtrack feature as background to The Mule as it spent several weeks at number one on the Australian charts in 1983. Skyhooks and other bands feature large as characters play radios and TV. Genuine news footage of the Americas Cup, the Australia II (yacht) and footage of the actual races, feature as ‘background’ and points of conversation with the characters. ‘Turn up the TV’.

Although not as gory as some drug movies, The Mule has a bit of violence. It wasn’t violence, however, that had me dry-retching during one scene. To be fair, this was due to a real thing and good acting. However, you’ve been warned: The Mule is not for the faint of stomach.

The Mule is based on a true story with twists and turns and a surprising ending. It’s well-paced, funny, black, gross… think a true-life and not-quite-so-intense version of Breaking Bad. Watch The Mule if you liked Life on Mars and Mr Reliable.