Paul Revere rides to warn the Americans that the Regulars are coming: it’s the midnight ride.

Crane (Tom Miso) rocks up for a very important meeting with the Freemasons who are going to tell him what he needs to know to combat the headless horseman. They already know the horseman will ride at night with lethal intent so they plan the meeting for AFTER the time the horseman will be active at night. He might even embark on a midnight ride.

The Freemasons don’t tell Crane anything beforehand, not in person and not over modern technological conveniences like, y’know, TELEPHONES. Because that would be too obvious.

Crane rocks up at the Freemason’s manor to find the Freemasons headless and the headless horseman well-equipped with heads when he rides away.

Minion: “You could say he got a head start.”

Later on, the minion had time to ponder some more punbilities. He said, “If the headless horseman was a zombie it would present a real conundrum.”

“Why?” I asked, knowing I was walking into a trap.

“How would he eat the brains?” asks the minion.

Irving (Orlando Jones) walks into a laboratory with taxidermied animals and other weird stuff on display.

I wondered if the taxidermied animals in the morgue were about to spring to life or lose their heads or if the barely visible person hiding in the corner is going to be a supernatural ghoul or just a regular gainfully-employed-in-lab human-type ghoul.

The human ghoul has been experimenting on the headless horseman’s head. Now he can see through his eyes and packs heat when he shoots up the lab — and SHOOTS AT HIS OWN SKULL — in his recovery mission. And, yep, at least one stuffed bird loses its head. And the human ghoul ends his days before the end of days.

Irving talks the skull and flees the scene but forgets to cover its eyes. I’m really not sure if the skull is supposed to be able to see or not. Please explain why the headless horseman couldn’t find his skull until now but now he can and, later in this zode, he can’t.

Minion: “Now the skull is grinning… I’d like the Horseman’s ride to be more radish.”

On the screen, they try doing a Breaking Bad to destroy the skull. It fails.

They try blowing it up. It fails.

Crane sees 4 lanterns and asks Abbie about contemporary customs regarding hanging lanterns. They discover the Freemasons heads empty of brains, thus desecrating their “temple of the mind”. Both Paul Revere’s lanterns and the Freemason’s heads were lined with silver. The two rides are parallel; Paul Revere carried a manuscript with information on how to defeat the enemy.

Minion says, “It’s taken a while for the Freemasons to be snuffed out.”

Crane says, “We’re you charged a fee for that [bottled] water? My god, it should be an inalienable right.” Then he corrects the historian who’s giving children lots of misinformation.

In the Bat Cave (Bat Cave looking good!) researching Paul Revere’s manuscript, Crane is hilarious, first when he fights the laptop and even more so when he gets sarcastic.

Morales (Nicholas Gonzalez) is a basket case after Walking Dead Brooks (John Cho) warned him off having anything to do with Abbie.

Abbie phones Morales from an underground tunnel to cancel their coffee date because that’s how mobile phones work, right?

Minion: “Death had the last word.”

Why could Death find the skull in the Morgue after not being able to find it then it can’t find its head in the Bat Cave?

Minion: “There’s a bit of the Da Vinci Code in this.”

Crane talks to Abbie: “As long as it doesn’t include the inner net.”

Crane is crushed to learn that Jeffereson had 6 kids by a slave woman and plagiarized his line regarding people who read from newspapers.

Crane flees from the horseman, jumps off his horse, pulls up a hatch and jumps in. We’re laughing hilariously because, a few seconds earlier, the horseman was hot on Crane’s heels, so much so he should have taken Crane’s head clean off instead of letting him escape into the CLOSED underground tunnel.

The headless horseman falls into their trap: they turn on ultraviolet lights because sunlight is the horseman’s Achilles Heel and UV light is more accessible than a modern-day witch.

Minion: “At least it ended with the light stuff. A bit light on for story. They did crack some skulls though.”

Early in our relationship I said I’d buy cushions so I’d have something to pelt him with when he hurled puns. We now have cushions but I have the laptop on my lap and the cat is close by. He’s safe — for now. 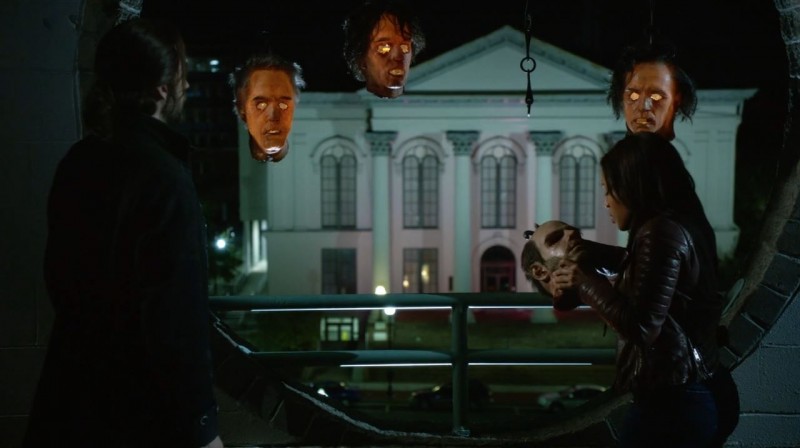