A war zone. An airplane. On the ground, a foot soldier with a bow and arrow seems to think he might take down big metal bird. Gives up. Sees child, rushes after the child who’s walked into a landmine — eh hem — hand-mine zone.

The Doctor arrives and throws the boy his sonic screwdriver, creating a funnel of sound through which they can talk because obviously they couldn’t talk to each other without assistance across a reasonable throwing distance.

The Doctor asks the boy’s name.

Clara is teaching at school when she looks out the window and notices a plane hanging in midair.

Missy has the Doctor’s Confession Dial, a gizmo that was delivered to her as his best friend on the eve of his death. They’re both Time Lords. Let’s not unpack that, shall we? Especially because time travel hijinks follows.

Missy and Clara travel to medieval England for a cabaret performance that leaves A Knight’s Tale at the starting gate with its inessential-to-the-plot anachronisms. This is played for laughs, primarily aimed at children, fans and drinking game participants. (Beware: any rules for drinking games I can think of could result in imbibers of low-alcohol beverages drinking irresponsibly.)

Some of the dialogue and character interaction was entertaining. I liked Missy’s comment that Clara isn’t the Doctor’s friend, she’s more like the puppy being walked by a couple. Obviously the Doctor and Missy are meant to be the couple in that metaphor.

‘The Magician’s Apprentice’ features one human-dalek with an eyestalk sticking out of his head. I want to wrench those superfluous eyestalks off the purist master race and beat Steven Moffat over the head with them.

Doctor Who has gone from 3 identical daleks surrounding a building in the 1970s. (“It’s symbolic; they don’t have the budget for more,” said Mum when I bitched and moaned about this episode when I finally saw it for the first time around 1978. It was a “new” episode after the ABC repeated the same limited range of stories endlessly. I wasn’t happy: NOT ENOUGH DALEKS to surround UNIT’s HQ. And a weird silly black hole. OMG I need to watch that again, I think I’ve only seen it about twice. STAY ON TARGET. Oops, sorry, I digress.)

In ‘The Magician’s Apprentice’, nearly every dalek is unique. Terry Nation, creator of the daleks, is turning in his grave. It’s the equivalent of SS soldiers modifying their uniforms to be unique. I suspect Steven Moffat is so excited about having a big budget that he’s forgotten one of the reasons why Doctor Who of the 1970s could get away with so few daleks on set: the master race conforms. Which is also why the humans with the dalek eyestalks are a plot-chasm. Not to mention: WHY GIVE THE DALEK-HUMANS A THIRD EYE? Does Moffat not understand that is an EYE stalk?

The current season of Doctor Who under Steven Moffat tries to be a pantomime but without singing and dancing. Missy does a little bit of both but she’s testing her environment, not performing in a Joss Whedon musical. It falls short of breaking the fourth wall with “Children, where are the daleks?” or “Should I do this wildly stupid thing?” while disparate scenes are juxtaposed and the plot lacks logic. Steven Moffat has declared, repeatedly, in Doctor Who extras, that Doctor Who is a silly show; he’s following in Russell T Davies’s footsteps in recreating his perception of what the show was historically to families. One step short of pantomime with elements of cabaret is Moffat’s flavour.

I recommend Doctor Who s09e01: The Magician’s Apprentice to pantomime fans, families with children who don’t mind being scared a little, who appreciate dad jokes in spite of plot fail and who want to see Peter Capaldi demonstrate his expertise on the guitar.

This episode ends in a cliff-hanger. 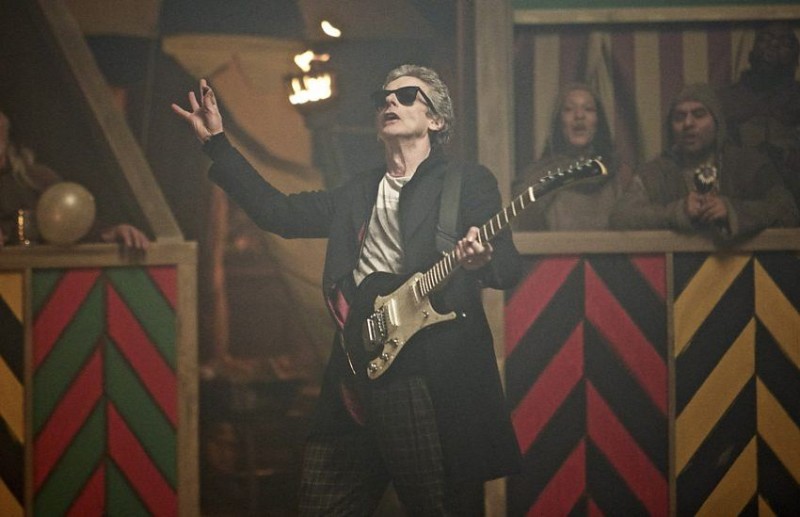