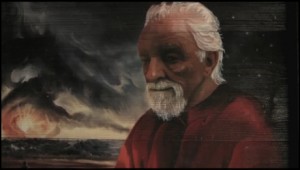 Rome threatens Florence. In the age-old tradition of ‘kicking the cat’, Lorenzo de Medici threatens Leonardo da Vinci who is also being manipulated by their mutual lover Lucrezia.

Lucrezia fears being exposed as a traitor although she successfully framed Bechhi, Lorenzo’s uncle.

Leonardo searches for the Book of Leaves in the most unlikely places. Leonardo’s fascination with Lorenzo’s statue is finally explained; we’ve seen this statue MANY times whenever Leonardo visits Lorenzo’s study. Now I expect we’ll see MORE of it.

Visions of brutal slaughter and Riario invading his workshop haunt Leonardo. It’s not clear if Leonardo is merely worried about the impending battle or if something deeper is manifesting.

Leonardo seeks answers from a deceased magician as to the location of the Book of Leaves.

Although both Clarice Orsini (Lorenzo’s wife) and Lucrezia feature more in this episode, it’s as the wife and lover. Da Vinci’s Demons makes no attempt to pass the Bechdel Test; the writers appear to believe women have very little role in Medieval politics other than as spies, wives and lovers whose lives revolve around men. In contrast, men’s lives revolve around other men, merely using women for sexual release and, periodically, as their muse.

As Da Vinci’s Demons slithers between political snakes, unfaithful lovers, manipulative traitors and Leonardo’s genius, I find myself enjoying the series more, becoming more engaged with the story and characters. I’m still not quite sure if Da Vinci’s Demons is fantasy or historical fiction but I’m putting my money on fantasy because of the Book of Leaves and few other things pointing towards a Game of Thrones-like ‘low fantasy’ first season.