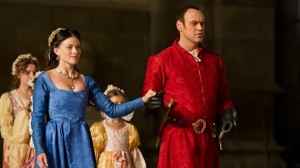 The Pazzi family plans to overthrow the de Medicis at Easter. (If you thought Da Vinci’s Demons was the Sopranos set in medieval Italy, you’d be right.) Pictured above, the de Medici family – Lorenzo, Clarice (his wife) and their daughters arrive in the cathedral to celebrate the Easter mass where the Pazzi family plots to poison them with the Eucharist (the wafers that represent the Body of Christ during Mass).

The Turk – Alexander Siddig – makes another guest appearance (again, too short) to tell Leonardo he must travel overseas and he must catch a certain barge on a certain day in order to recover the Book of Leaves.

News of Giuliano’s death precedes da Vinci’s return to Florence. Desperate to save Lucrezia, da Vinci gambles – again – with his life; will his talent insufficient to quell Lorenzo’s rage?

The lovers of the episode title are Clarice and Lorenzo, Lucrezia and Leonardo and, of course, Lorenzo and Lucrezia. Because triangles always make things complicated. Just in case you’d started to like Lorenzo – just a little – he exposes his inner two-year-old, throwing a tantrum at a most inopportune and inappropriate time.

I was a bit ‘meh’ about the last episode but the stakes are raised in ‘The Lovers’. Not knowing enough history and not knowing if the writers were sticking to his story anyway, I was on the edge of my seat.

When I looked for images for the previous review I found some that have me chomping on the bit for next season, especially after the cliff-hanger with which this season ends.