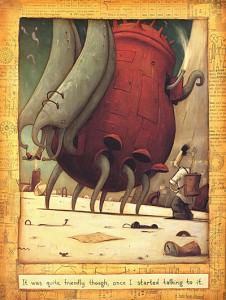 The observant and loyal reader will notice that I reviewed The Lost Thing in the first edition of Dark Matter. The thing is, Madman sent me the collector’s edition and I love Shaun Tan’s work so much I just had to add a bit more…

Shaun Tan is a gifted artist with a creative imagination telling ageless, timeless stories through images with little if any need for dialogue. When I first received The Lost Thing, my teenage son (MTS) grunted the way teenage boys do, then added ‘that was a good book’. My jaw hit the floor. I had never seen the book, so I demanded details. It turns out MTS remembers the book from his grade four classroom but never brought it home. If he had, I would have discovered Tan years earlier. 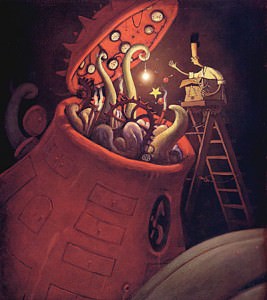 The collector’s edition of The Lost Thing includes a number of special features well worth watching as well as a beautiful hard cover book called What Miscellaneous Abnormality is That? Filled with mostly grey scale drawings, sometimes on a yellowish background, the images are engaging snapshots of more Tan-style monsters in the tradition of Where the Wild Things Are, which was a feature of my own childhood.

I highly recommend this and Tan’s other works to the young and young at heart everywhere, as well as lovers of genre art.