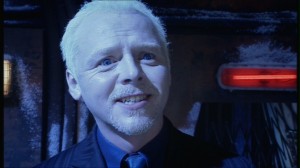 The Doctor (Eccleston) and Rose (Piper) land on a space station in the year 200,000. They emerge from the TARDIS so the Doctor can word Rose up, playing the Long Game (yes I went there), the Doctor playing Cyrano to Rose’s Christian, enabling Rose to show off to their new companion, Adam, who is ‘a bit good looking’ according to the Doctor.

The Doctor realizes something is wrong because the Fourth Great and Bountiful Human Empire isn’t going according to schedule. Mainstream media in the form of Station 5 has co-opted humanity’s development, stifling questions while breeding paranoia.

How original, doesn’t sound like anywhere I know, no, not at all.

Simon Pegg is one of the Geek Gods so his appearance in anything science fiction is to be treasured. As a villain with comedic overtones, Simon Pegg is awesome. It’s such a shame they had to give him white skin, white hair and blue eyes, thus making him an albino-type so the makers of Doctor Who could utilize that worn-out trope, the evil albino. How many senior people in Murdoch’s and Packer’s empires are albinos? How many people responsible for the GFC are albinos? WhyTF can’t the Editor just be a guy in a suit FFS?

Overall the ‘Long Game’ is a light, fun romp. Visiting characters are pretty shallow because there’s not much room for development when shoehorning a whole adventure into one episode, about 45 minutes. On first and even third viewing, this episode is very watchable, a fun family story.