Princess Ariel is a mermaid and the youngest daughter of King Triton. When Ariel falls in love with the human Prince Eric, her father’s forbidding sends her into the clutches of sea-witch Ursula. Ariel becomes human and has three days to share true love’s kiss with Eric to stay that way. The catch is that Ursula’s price is Ariel’s voice. When Ursula and her minions start to play dirty, Ariel needs a little help from her friends to get to her happily ever after.

The sardine began the beguine and it really was music to me. The Little Mermaid has one of the most fun soundtracks in the history of Disney. Fun and classic sing-along numbers include Part of Your World; Under the Sea; Poor Unfortunate Souls; Les Poissons; Kiss the Girl; and even the 38 second long Daughters of Triton. I may have been listening to the soundtrack for several days to prepare for today’s viewing. I may have also listened to it several times since the movie.

Prince Eric is probably my favourite Disney Prince. Eric does have the affliction suffered by a few princes in that he will fall in love with a woman and then forget what she looks like. However, he did just wash ashore after a shipwreck so we’ll overlook that little flaw. Any man willing to climb back onto a burning, sinking ship to rescue his dog is okay in my books.

I love Ursula as a villain. She is truly wicked and is probably the reason I’m still icked out by octopi. Also, Ursula has one of the best villain songs in the history of villain songs (even better perhaps than Scar’s Be Prepared from The Lion King). 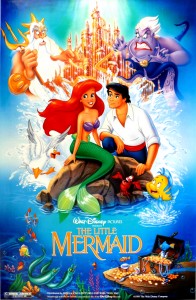 The Little Mermaid always feels like it is balancing on the edge of the older Disney Princess movies and the more modern(ish) ones. For a film that is 25 years old, it has stood the test of time and is still thoroughly enjoyable. I still laughed, I still teared up, I still felt a rush of joy when Ariel finally got her prince — even if I have already seen it countless times.

If you like Disney movies new or old, I would absolutely recommend catching up with Princess Ariel, Prince Eric, King Triton, Scuttle, Sebastian, Flounder, and even wicked Ursula. If you can do so in the cinema as I was lucky enough to, then even better!

“Ariel, listen to me. The human world is a mess. Life under the sea is better than anything they got up there.”